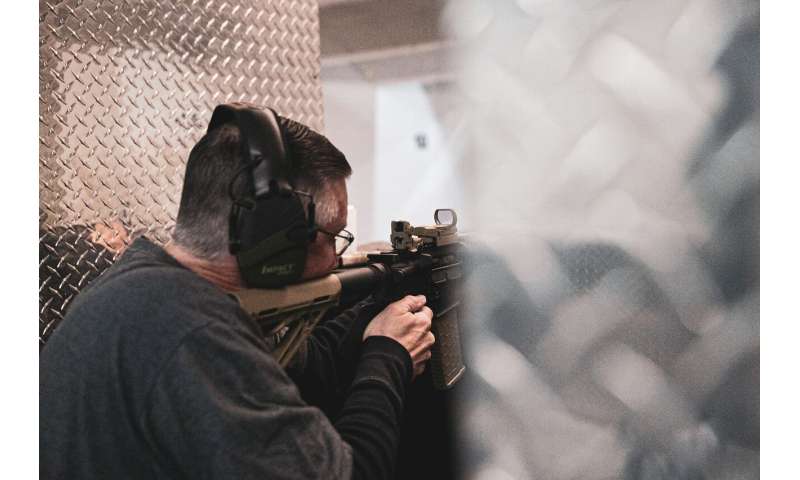 Accidental shootings of unarmed victims are tragically common, and sometimes they happen because the shooter misperceived the victim as also having a gun.

Nearly a decade ago, cognitive psychologist Jessica Witt wondered if the mere act of wielding a firearm could bias someone to perceive another person as wielding one, too—and more importantly, if such a bias could be scientifically measured. A series of experiments later, Witt and her research team concluded, yes and yes.

The team has recently published a new set of experiments further underscoring what they call the “gun embodiment effect” in the journal Cognitive Research: Principles and Implications. Their original research was published in 2012 when Witt, now a professor in CSU’s Department of Psychology, was a researcher at Purdue University. For this recent study, they’ve replicated the experiments with larger sample sizes and more confidence in their claims that the gun bias exists; that it can be measured via controlled laboratory experiments; and that it seems universal—that is, not changed by an individual’s prior experiences, general attitudes about firearms, or personality traits.

“To prove something is universal, you have to rule out all possible alternatives,” said Witt, an expert in the intricate links between human vision and cognition. “We have not done that yet, but we have some really good first steps.”

Witt’s team recruited over 200 CSU students to help suss out the original hypothesis. Participants, holding either a fake gun or a spatula, were hooked up to a motion-tracking system. The system recorded both the speed and accuracy of their reactions to images on a screen of people holding either a gun or a neutral object—in this case, a shoe.

The researchers found strong evidence that when holding a gun, participants were a little slower to make their judgment about whether the other person was also holding a gun. The difference was about 8 milliseconds—a small effect, but it was unmistakable. They read this result as the person needing to take the time to inhibit a primed response caused by carrying a gun themselves.

They also found that holding a gun affected participants’ accuracy, with a 1% greater likelihood to misperceive the other person as having a gun too. “It’s as if, when they’re holding a gun, they are prone to see a gun,” Witt said.

The effects they saw in the lab were mercifully small. “But if you have this small effect, and put it on a national scale, and you talk about how many people have guns in this country, even these small effects are important,” Witt said. “For example, if 100 officers wielding guns interact with 10 unarmed people a day for 100 days, in these 100,000 interactions, our data suggest there were will be 1,000 misperceptions of an unarmed person as holding a gun.”

The subtlety of the gun embodiment effect challenged Witt’s team to strengthen their original work, in part in response to the replication crisis in psychology experiments that’s plagued so many research teams. “Our study ended up serving as a replication check and revision to our earlier claims,” Witt said.

They hope they can next dive into what circumstances might change the bias for people holding guns. For this recent test, they looked at a host of possibilities, like participants’ attitudes toward guns, personality traits, and measures of their impulsivity. None of these individual circumstances seemed to change the gun bias, but the absence only sparks more questions. For example, does the bias change depending on the situation? If the shooter is scared? Or fatigued?