Forest therapy or bathing is a centuries old tradition that involves immersing yourself in nature. In Japan, it's called Shinrin-yoku from shinrin meaning forest and yoku meaning bath. It took off in the 1980s, when busy, over-stressed city workers needed help to wind down and re-calibrate.

The benefits of getting out of the city and into nature were so clear, its practice today is funded through the Japanese health system. Also known as eco-therapy or outdoor therapy, other cultures embrace the idea too. In South Korea, people go to purpose-built Forest Recreation Centres, China is investing in forest therapy trails, while Germany is embarking on a clinical approach called "Klinische Waldtherapie", investment in research into the preventive medical benefits of the practice. 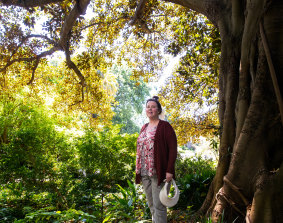 Julie-Anne Houghton is a big fan of forest bathing.Credit:Simon Schluter

The desire to actively embrace nature through the senses has come into its own in Australia due to coronavirus, as many of us have felt cooped up and burnt out. The good news is you don't need to live near pristine wilderness or a national park to practice forest bathing.

Susan Joachim, president of the International Nature and Forest Therapy and Alliance, said it can be practiced in your own garden or indoors, looking over trees and greenery. Joachim ran workshops in the practice and is now a mentor and trainer; she has created a podcast about the process, so anyone can try it themselves. 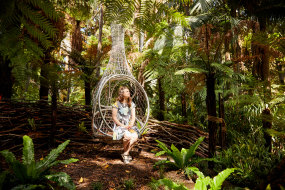 The physiological benefits of forest bathing are well-documented.

The focus is on the senses, tuning in to the natural sounds and scents, as well as the visual: the many variations on green, flowers in bloom, butterflies and bees, “there’s all this natural activity”.

Ms Joachim said COVID had forced us to rethink our priorities, our neighbourhoods, our way in the world. “Give yourself permission to slow down, that’s what we teach people on these walks, notice what is happening,” she said. “Nature is supporting you to slow down and to connect and to notice.”

Having long been a nature lover and a hiker, Joachim discovered forest bathing by chance when she visited her elderly mother in the US and spent time in the Blue Ridge mountains. “That’s the time I discovered Shinrin yoku – something turned inside of me. I get goosebumps thinking about it, something shifted in me. I couldn’t quite describe it.”

That’s the time I discovered Shinrin yoku – something turned inside of me. I get goosebumps thinking about it.

At Melbourne’s Royal Botanic Gardens, forest bathing courses are held throughout the year; they were stopped due to COVID but are about to recommence. Groups are capped to 15 people (minimum age 12) and sessions run for two hours, finishing with a morning or afternoon tea.

In the Blue Mountains, two-hour nature therapy walks are held twice a day every Saturday along the Lady (Nancy) Fairfax Walk at Botanic Garden Mount Tomah and conclude with a Japanese tea ceremony (minimum age 13).

Julie-Anne Houghton, 53, attended a forest bathing session at the Botanic Gardens in Melbourne earlier this year. Originally from Seymour in Victoria, she has been a regular visitor to the gardens but had never considered forest bathing. She said she entered the session feeling anxious and quite highly strung.

“When I came out I felt so refreshed. I found it was just what I needed,” she said. “A lot of people don’t breathe enough, don’t stop to smell the roses, [we’re] on the go all the time.”

Ms Houghton has since suggested it to her colleagues as a team building exercise.

Forest bathing is accredited by the Australian Counselling Association and Ms Joachim wants to see it adopted as a public health preventative practice. Aside from its simplicity, she says, it has significant economic benefits, cultivating good mental health and keeping people out of the public health system. While it is especially relevant in a global pandemic, Ms Joachim said forest bathing helps address the stress and loneliness prevalent in western society as well.

Joachim says the notion is underpinned by the "biophilia hypothesis" – the belief that humans are genetically predisposed to be attracted to the natural world. “We are from nature, we’ve forgotten how deeply connected we are.”

Most Viewed in Lifestyle