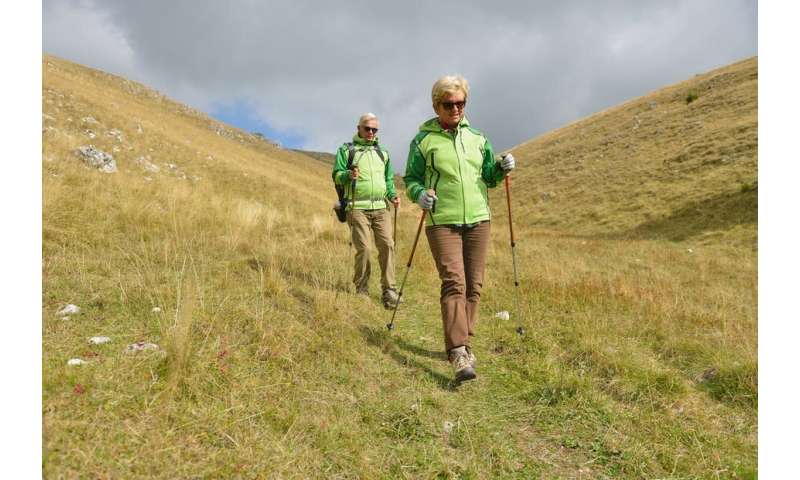 Falls are a common cause of injury in older adults and can lead to disability. Luckily, the risk of falls can be reduced with regular exercise– but not all exercise. Our latest study shows that so-called eccentric exercise—such as walking downhill—may temporarily increase the risk of falling.

Every activity we do requires our muscles to either shorten or lengthen. For example, when we climb a flight of stairs or get out of a chair, our muscles contract and shorten (a concentric contraction). Our muscles also lengthen during movements—an eccentric contraction. When we walk downhill, descend stairs, or go from standing to sitting, the muscles in our thighs lengthen under the load to slow the body down, like brakes.

However, eccentric contractions can cause short-term muscle damage and sensations of muscle soreness, particularly if it’s been a while since you were last physically active.

For example, if you aren’t used to walking downhill or performing a squat, you will experience muscle soreness. This soreness may occur a few hours after exercise, and can last for several days. This pain is called “delayed onset muscle soreness,” or DOMS. Typically, exercise involving primarily concentric contractions, such as cycling, does not cause substantial DOMS.

While DOMS is perfectly normal, new evidence from our laboratory shows that eccentric exercise leads to muscle weakness and impaired physical function in older adults, which may increase the risk of falls for several days.

In our study, we compared the effects of two types of exercise: those involving mainly concentric contractions (walking on a level surface) with exercise involving mainly eccentric contractions (downhill walking). We also looked at the effects of these types of exercise on short (30 minutes) and long-term (24 and 48 hours) recovery of muscle strength, balance and physical function in adults aged 65-78 years.

Participants attended our lab three days in a row. On the first day, we measured pre-exercise balance, muscle strength and physical functional performance. The participants then performed 30 minutes of either walking on a level treadmill or a downhill treadmill. We then measured the same outcomes immediately post-exercise, and again at 15 minutes, 30 minutes, 24- and 48-hour intervals after the initial exercise tests. All tests were undertaken at the same time of day.

The increased risk of a fall immediately after concentric muscle contractions is probably because of the build-up of metabolic byproducts (such as hydrogen ions or inorganic phosphate) that reduce the muscle fibers’ ability to produce force. However, the negative effects of fatigue from this type of exercise were short lived. All participants recovered to pre-exercise levels around 30 minutes after stopping exercise.

These findings suggest that the muscle damage that happens after unaccustomed eccentric exercise leads to muscle weakness, balance problems, and impaired physical function—which can persist for several days. This could endanger an older person’s safety by increasing their risk of falling.

We don’t yet fully understand how and why eccentric contractions cause a loss of physical function that persists, but we think that it’s due to damage to certain structures in the muscle that enable movement. Inflammation inside the muscle—which takes time to develop after exercise—may also be a cause.

While regular exercise is important for good health and longevity, older adults should be mindful that exercise can temporarily increase the risk of a fall and lower physical function.

Many common daily activities, such as descending stairs or walking downhill, rely almost exclusively on eccentric muscle contractions, which means they carry a higher risk of falling. However, this isn’t a reason to lose hope. Subsequent eccentric exercise performed days, weeks, or possibly even months after an initial bout results in less muscle damage and soreness in the future. Frequently performing strength-building eccentric exercises, such as squats, are very effective in older adults and may reduce the risk of falls in the long term.