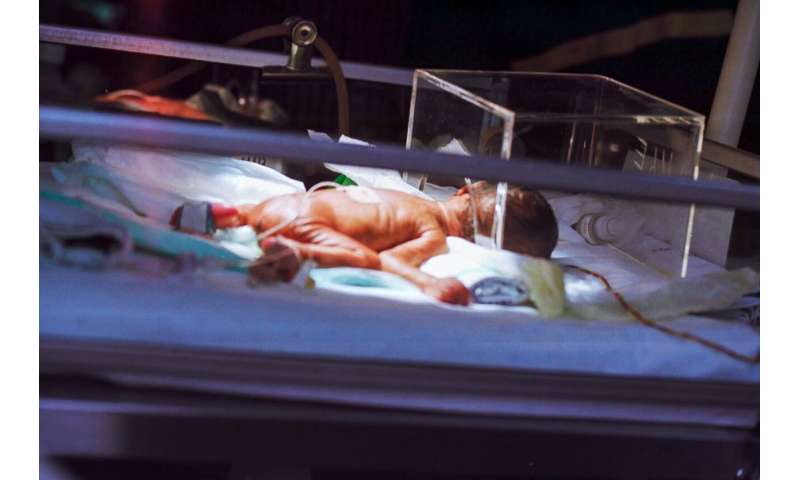 In neonatal intensive care units (NICU) across the country, a variety of professionals work together for a single goal: to care for babies who need treatment and help get them out of the unit and on to living happy, healthy lives.

How this goal is achieved, however, is not singular. The practices employed are just as diverse as the opinions and roles of the different people involved: teams of medical professionals including neonatologists, nurses, and respiratory therapists, among others, along with the parents and family of the baby.

The University of Delaware’s Lindsay Naylor was part of a research team that analyzed the negotiations over the knowledge and practice of care in the NICU that was published in the geography research journal Geoforum.

The paper was co-authored by Naylor, assistant professor in the Department of Geography and Spatial Sciences in UD’s College of Earth, Ocean and Environment. The department’s faculty and students seek to research and explain patterns of differences and commonality across the human and natural environment. That includes examining the role that human beliefs, activities and decision-making have in shaping the world around us. The other authors of the paper were Abigail Clarke-Sather and Michael Weber, both from the University of Minnesota, Duluth. Clarke-Sather previously worked as a visiting assistant professor at UD in the College of Engineering and the Department of Fashion and Apparel Studies.

Naylor said the main point of the paper was to show that care in the NICU comes from multiple people with diverse skills and attitudes.

“We tend to think about hospitals as places where you go and receive medical care, but that’s pretty limiting if you think about what’s actually going on,” said Naylor. “Care takes on multiple forms in order to provide what’s needed for these patients. All of the care work that is being done by everyone is incredible, and it takes an emotional toll.”

They wrote this paper to “trouble” care, or raise awareness of the complications inherent in what is often assumed to be a simple act, and show that care takes on many forms.

While acknowledging the importance of medical care, the paper focuses on other forms of care—such as feeding the babies their mother’s milk and skin-to-skin contact, also known as kangaroo care—and how that can happen alongside medical care in the NICU and have dramatic influences on it.

Clinical studies show that feeding preterm infants human milk helps to reduce common and life-threatening medical issues. The practice of kangaroo care is recommended by the National Association of Neonatal Nurses and has been shown in a number of clinical studies to be beneficial for the child, as it facilitates bonding between the parent and child.

“In thinking about all the care, equipment and effort that so many people put in in neonatal intensive care units, we wanted to explore simpler alternatives, such as kangaroo care and expressing milk or breastfeeding, to some of the expensive care,” said Clarke-Sather.

She added that other countries without the economic resources of the United States have to rely on these forms of care and have success.

“This research looked at the idea of transferring some of that knowledge and practices from other countries to the United States where we have a pretty high rate of maternal mortality, pretty high infant mortality, and premature birth, especially for a country where we spend a lot of money on the beginning of life care,” said Clarke-Sather.

To gather data for the study, the researchers sent out a national survey, with the cooperation of breastfeeding coalitions, to better understand the context for NICU treatment. The survey included questions about parents’ experiences having infants who received NICU care. The results showed that parents have dramatically different NICU experiences across the country.

They then gathered data at one specific NICU between 2018 and 2019, conducting more than 30 hours of participant observation and interviewing NICU staff and birth mothers.

Naylor said that though everyone involved in the infants’ care always wants what is best for them, there can be a power dynamic in the NICU between the parents and the care providers.

“It is very nuanced. Parents need to advocate for themselves in the NICU because the relationship between the care providers is part of a power dynamic,” said Naylor. “The baby has a parent, but the baby is also the patient of the medical professionals and so who controls the care is really fraught. In our survey, one respondent asked, ‘Whose baby is it anyway?'”

Nurses can act as the gatekeepers to care in the NICU—either providing or restricting access to parental care. Sometimes, their views on how to care for the baby may differ from that of the mother’s.

“During the course of our interviews, one mother said that her concerns as a parent were being superseded by the nurses,” said Clarke-Sather. “So while everyone has the child’s interest at heart, the control is housed in the hands of the nurses and everyone feels that. That really changes how care can happen, especially things like kangaroo care that necessarily involves the mother or the family members.”

Some of the nurses can go above and beyond in encouraging hesitant mothers, who are frightened that they might hurt their baby, to interact with their child, while others can act as more stringent gatekeepers.

In addition, nurses are rotating in and out of the NICU and what one nurse tells a mother might differ from the opinion of another nurse who comes on duty.

The space is also a limiting factor, as sometimes in the case of preterm births, the mother may still be in patient care herself.

“Generally, preterm birth is a traumatizing experience both emotionally and bodily,” said Naylor. “The NICU we worked in was once in a different building than the maternity, postpartum ward. So in order to get mom to the baby, it required a lot of coordination among the staff.”

In an NICU setting, kangaroo care is complex and may not always be appropriate based on the medical condition of the infant.

On her very first day in the NICU, Naylor observed the challenges involved in getting a NICU baby out of an incubator and onto a mother’s chest. Four staff members brought the baby to the mother, with three nurses taking a different tube or wire, and then a respiratory therapist focused on a breathing tube to ensure the safe transfer of the infant to their mother.

This limited space also comes into play with regards to human milk. Most infants being treated in the NICU cannot feed at the breast because they have not yet developed the suck-swallow-breath coordination that is required. Because of this, many are fed through a nastro-gastric tube that is placed in the nasal cavity and carries milk to the stomach.

When milk is delivered this way, the parent is disconnected from the process. The milk they express is controlled and distributed to nurses by the milk bank staff within the NICU, which limits parental involvement.

With all of these various factors to consider, Naylor said that they wanted to write this paper in order to “trouble care” and show that it takes on many forms in the NICU.