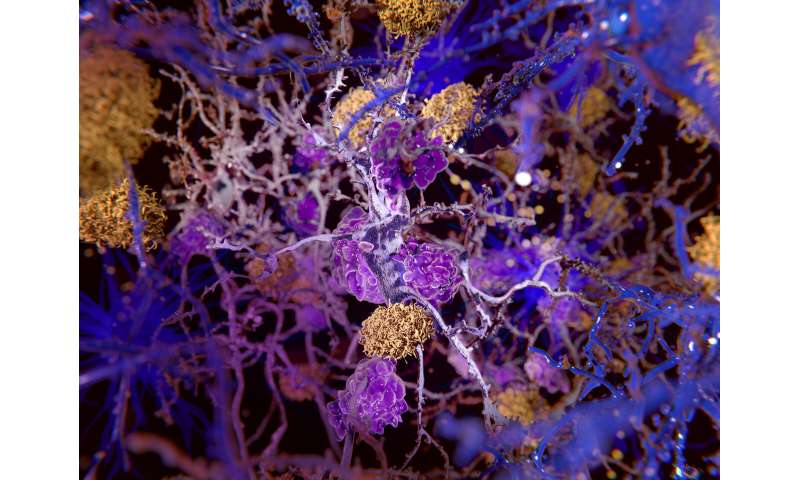 Memory loss and confusion are signs of Alzheimer’s disease. Physicists Serge Rombouts and Martina Huber have developed new methods to help medical science get to the bottom of this insidious disease.

It wasn’t planned, but Alzheimer’s disease has become a recurrent theme in the career of physicist Serge Rombouts, Professor of Cognitive Neuroimaging at the LUMC and the University’s Institute of Psychology. He received a Ph.D. in 1999 for a technique using an MRI scanner to visualise the brain activity of Alzheimer’s patients, and dementia has continued to crop up in many of his projects ever since. The ultimate aim: to use a brain scan to determine whether someone has dementia, in addition to the interviews and memory tests that doctors use to reach a diagnosis.

Distinguish from other forms of dementia

“The problem is that at an early stage Alzheimer’s disease has all sorts of similarities with other forms of dementia,” says Rombouts. “You want to distinguish between these at as early a stage as possible, and this diagnosis is also useful if you want to try out new treatments. The disease process in the brain begins 10 to 15 years before symptoms such as forgetfulness become apparent. And treatment may have a much greater effect if you begin years earlier.”

A scan diagnosis is not available yet, but with the right methods researchers such as Rombouts can now see differences between brain scans of Alzheimer’s patients and healthy test participants. “The thing is that this can be seen most clearly if we compare the two groups with each other. Unfortunately, you can’t, form a reliable diagnosis by placing an individual patient in the scanner.”

Peering inside the brain

The technique that Rombouts uses to visualise the brain does so by looking at brain activity. The blood flowing through active brain regions is more oxygenated and the scanner can register this. This data can be used to make coloured images of cross sections of the brain with some areas in red or green. The colours in themselves do not mean much, says Rombouts. It’s more of a way to clearly visualise the data.

In the past, volunteers were asked to carry out a task in the scanner, but nowadays they simply have to lie still on their backs. All sorts of activity can already be seen on the scans because the brain is never at rest but is always full of thoughts, plans and memories. The brain uses 20% of our total energy when we are at rest, says Rombouts. That busy traffic between brain regions can also be seen in a scan.

“We hope that a gradual change in spontaneous brain patterns will be of use in Alzheimer’s diagnosis. The hope is that artificial intelligence will play a part in this. Powerful computers can compare thousands of brain scans and perhaps make new links that people are unable to see.”

Martina Huber, who works at the Leiden Institute of Physics, uses a similar form of technology as Rombouts, but she uses this to map molecules rather than the brain. We know, for instance, that the amyloid-beta protein clumps together and lodges in the brain, and that this probably plays a role in the disease’s progression. These protein plaques are even visible under a microscope in people with an advanced form of Alzheimer’s.

How and why amyloid—which we all have in our bodies –clumps together is still unclear. But Huber’s spin-resonance instrument may help provide an answer: this can determine, at a temperature of -263° to the nearest half nanometer, how proteins come together to form a clump. As it is impossible to study this in the human brain, Huber works with test tubes. She places these in a man-sized, ice-cold piece of equipment that is continuously being improved in collaboration with the Fine Mechanical Department.

Huber: “We now know that a smaller accumulation of a few to a few dozen amyloid proteins that have not yet formed plaques is very harmful to brain cells. Physicists are trying to map this process in a test tube. We can see which pieces of the protein seek each other out and how proteins can change shape if they start to clump.”

The snag is that many proteins not stable Lego-like bricks, but are instead a hyperactive spaghetti of loose tangles that take on a hundred different shapes per second. Using liquid helium to substantially cool these drastically reduces this activity. “To measure in this chaos you simply need other methods. We are able to chart this chaos by using knowledge from physics plus new methods. What drives us is the desire to keep on improving the equipment so that we can answer these kinds of question from the medical world.”