Bowel cancer is one of the most common cancers to be diagnosed in the UK. You should consider speaking to a doctor if you find that your stools have changed colour without any obvious explanation, it’s been revealed.

Bowel cancer is a general term for any cancer that develops in the large bowel, and it may sometimes be known as colon or rectal cancer.

The early warning signs of bowel cancer can be very subtle, and many people may not be aware that they’re at risk.

That’s why it’s crucial that you always check your stools after using the toilet.

One of the key warning signs of bowel cancer is having stools that no longer appear a healthy brown colour. 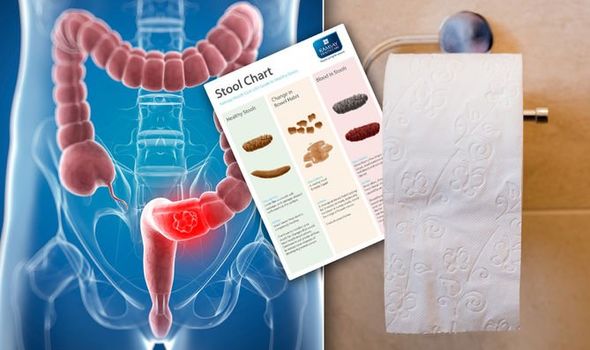 Your poo should appear a healthy brown colour, according to Ramsay Healthcare UK.

But bowel cancer may cause your stools to change colour to either a dark red or black.

It’s caused by bleeding higher up in the bowel, which can make your stools look like tar.

While bright red stools may look alarming, it’s unlikely to be caused by cancer, it said.

“Blood form higher up in the bowel goes dark red or black, and can make your stools look like tar.

“This type of bleeding can be a sign of bowel cancer.

“A change in bowel habit lasting for three weeks or more, especially to looser or runny stools, could be a sign of bowel cancer.” 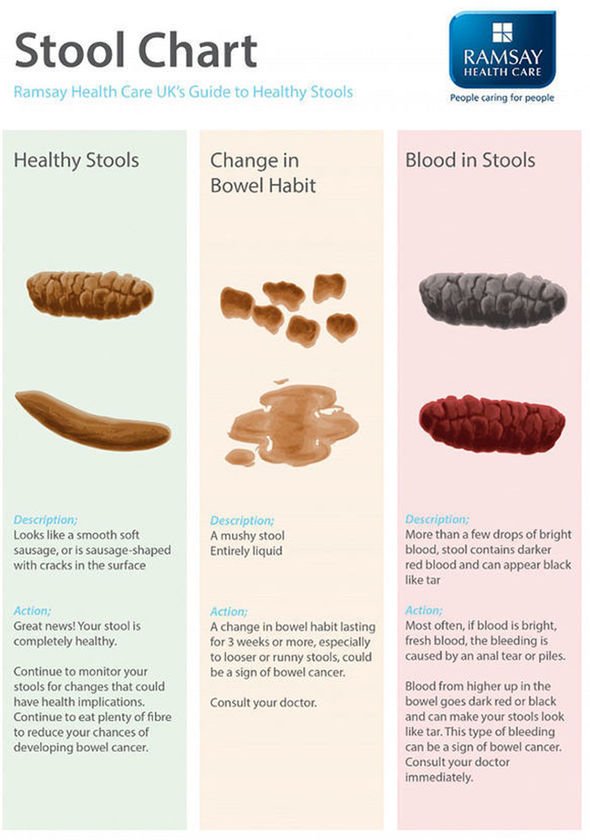 Your stools should also look like a smooth, soft sausage, it said.

Failing that, it should have a sausage shape with small cracks on the surface.

If your poo become mushy or completely liquid for no obvious reason for a prolonged period of time, you should consider speaking to a doctor.

Any change in bowel habit that lasts longer than three weeks should be seen by a medical professional.

You could lower your risk of bowel cancer by making some small diet or lifestyle changes.

Eating large amounts of red and processed meats have been linked with a higher likelihood of bowel cancer.

Smoking, drinking too much alcohol and obesity could also lead to the disease, the NHS warned.

More than 90 percent of all bowel cancer causes occur in people over the age of 50.