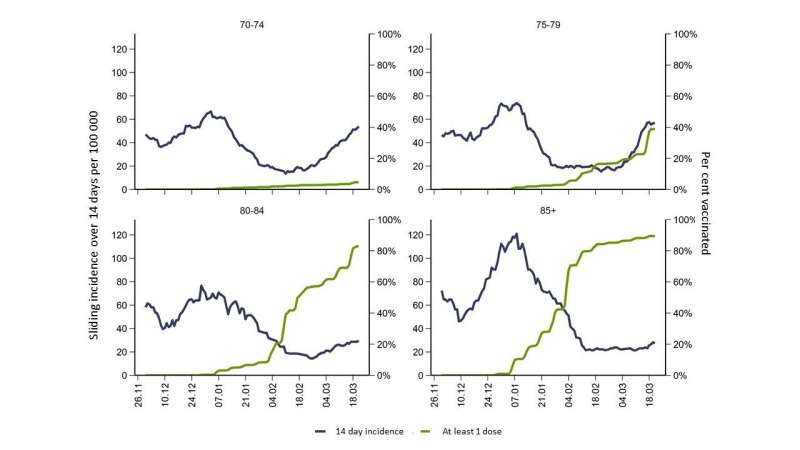 During the last five weeks, a sharp increase in COVID transmission has been seen among most age groups in Norway, but not among the oldest who have the highest vaccination coverage.

“This may be an early indication that the elderly have received protection after vaccination, although the effect of other infection control measures can also contribute to this result,” says Geir Bukholm, Director of the Division of Infection Control and Environmental Health at the Norwegian Institute of Public Health.

High vaccination coverage among the eldest

The first vaccine dose was given on 27 December 2020. Residents in nursing homes and the population over the age of 85 were the first to be offered vaccination in Norway. By week 11 in the over-85 year age group, 89% have received at least the first vaccine dose and 81% have received the second vaccine dose. In the 80-84 year age group, 83% have been vaccinated with at least the first dose and 54% with the second dose. Vaccination of people in the 75-84 age group is ongoing, so the proportion of people who are vaccinated is currently lower in this group.

The figure shows a comparison of the proportion of vaccinated people in the oldest age groups, and the sliding 14-day incidence (number of new cases per 14 days per 100 000 inhabitants for each age group) of COVID-19 from November 2020 until 21 March 2021.

The 14-day incidence in this period was at its highest around the new year period, and the figures show that there was a downward trend in different age groups even before vaccination began. The decline was probably due to stricter infection control measures and a changed pattern of contact after the Christmas holidays.