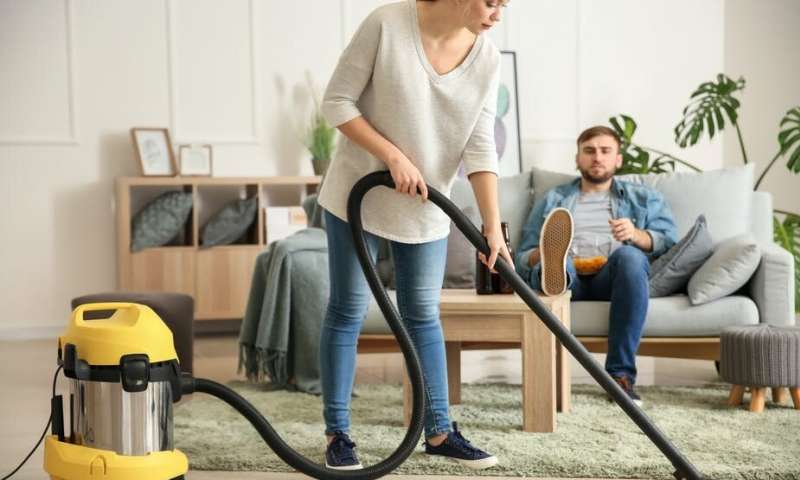 Coronavirus restrictions have shaped our daily lives for the past nine months. But the fact that we’ve all learned to live with them doesn’t mean they’re any easier to cope with.

A key question as England went into a second national lockdown in early November—and as restrictions tightened across the rest of the UK—was whether the public would follow the rules to the same high degree as they did towards the beginning of the crisis, or whether we’d see signs of complacency. With growing skepticism about the government’s response to the virus, confusion about the guidelines, and people already having sacrificed so much, would another shutdown be a bridge too far?

New research by King’s College London and Ipsos MORI finds that the British public have actually proved remarkably resilient throughout the coronavirus crisis. Seven in ten say it’s been as easy or even easier for them to follow the current rules than it was during the UK-wide lockdown back in spring. And an even greater proportion—82% – say they’ve been just as, or more, careful about obeying the restrictions this time.

But while most people show little sign of reduced compliance, a notable minority have had a very different experience: one in six admit they’ve not been as careful in obeying the rules, and one in four say they’ve found it tougher to follow them recently.

Among this quarter of the population, a range of reasons were given for why they’d found the rules more of a struggle this time—with a clear gender divide in some of the explanations. For example, 54% of women who found the rules tougher said greater difficulty in meeting up with family or friends outside because of bad weather was a key reason, much higher than the 33% of men who said the same. 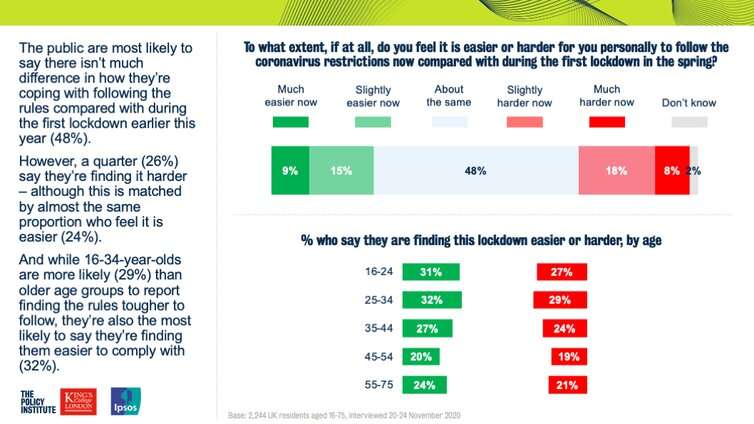 This tallies with previous research from back in April which found that women were going to greater lengths than men to maintain social ties during the pandemic—whether by checking on loved ones to make sure they were OK, or reaching out to the vulnerable or lonely.

Another issue that has been highlighted by various studies throughout the crisis is the degree to which women have borne the brunt of the domestic and childcare burden brought on by COVID-19. The Institute for Fiscal Studies found that, during the lockdown earlier in the year, mothers were looking after children on average 2.3 hours longer than fathers and doing 1.7 hours’ more housework each day.

The reopening of schools has lightened the childcare load this time around, but the challenge of keeping kids entertained while cinemas, sports centers, shops and the like are all closed shouldn’t be underestimated. On top of this, as with the previous lockdown, parents haven’t been able to split caring duties with extended family or friends due to the ban on households mixing. So if the gender divide in responsibilities we saw earlier in the year is anything to go by, mothers are still under considerable strain.

And away from home life, we know that more women than men have lost their jobs or had their working hours reduced during the crisis—in part because women are more likely to work in the sectors worst affected by the pandemic, such as the hospitality industry. 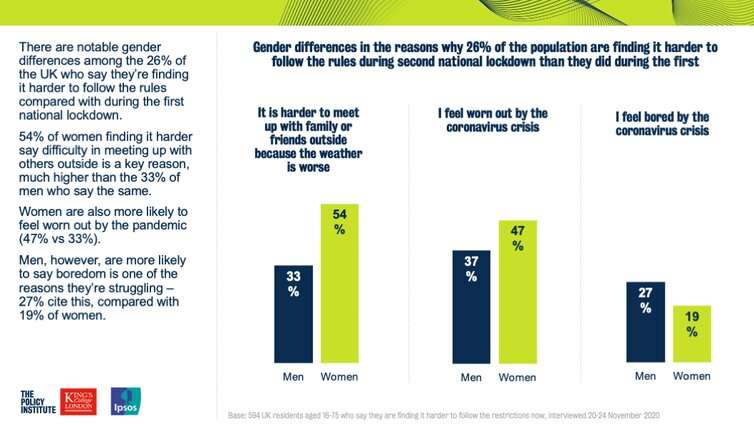 All of which might go some way to explaining why we found that, of those who said they’d had a tougher time following the latest restrictions, women were more likely than men to say they felt worn out by the pandemic—by 47% to 37%.

But while some have been left feeling drained—emotionally, physically and psychologically—by this crisis, there are others for whom it’s been a bit less of a rollercoaster ride—and they tend to be men. Among the quarter of the UK who said they’d found it harder to comply with the rules recently, 27% of men said boredom was a key reason, compared with 19% of women.

We know that earlier in the year, women were more likely to be doing a range of activities and hobbies under lockdown—from playing board games and doing crafts, to reading books and even dancing around the house. Men just weren’t getting into the swing of things as much as women. Given their higher rates of boredom now, it seems they still aren’t.