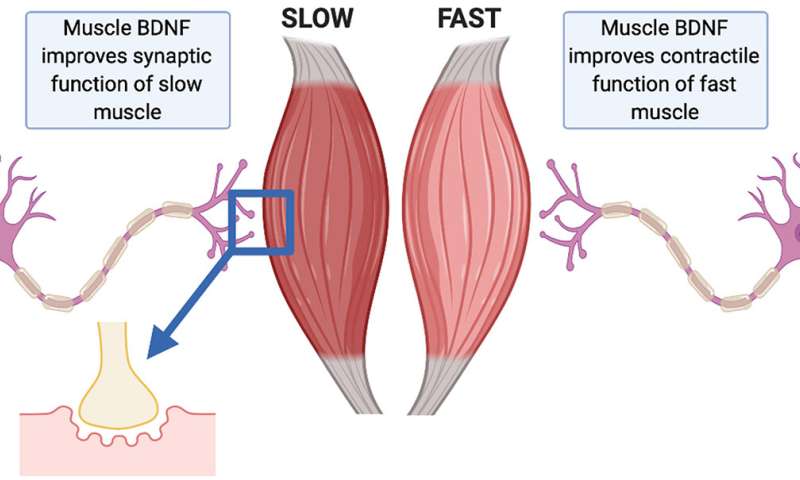 As we open computers to connect with each other remotely, motor neurons in our spinal cord are opening synaptic pathways to connect with our muscles physically. We rarely think about these electrical signals passing back and forth between computers or our neurons and muscles, until those signals are lost.

Kennedy’s disease, a neuromuscular degenerative disease, affects 1 in 40,000 men every year. Little progress has been made in understanding its biological basis since it was identified in the 1960s, but one promising lead may be a family of proteins known as neurotrophic factors.

MSU scientists Cynthia Jordan, professor in the College of Natural Science Neuroscience Program, and Katherine Halievski, former Ph.D. student in Jordan’s Lab and lead author, published a benchmark study in the Journal of Physiology describing the key role of one of these proteins in Kennedy’s disease: brain-derived neurotrophic factor (BDNF).

“There were stories that neurotrophic factors could slow down neurodegenerative diseases, but where they fell short was really understanding how they slow down the disease,” Jordan explained. “Where this paper and Katherine’s work stand alone is in using classic neuroscience techniques to understand how BDNF improved neuromuscular function at the cellular level.”

Motor neurons are cells that carry signals from the brain to every muscle in the body—fast twitch muscles that perform quick, high impact movements such as jumping, and slow-twitch muscles that sustain long contractions such as standing. At each step in the pathway—from the neuron, along the synaptic pathway and to the muscle—BDNF supports the process, giving both neurons and muscles what they need to connect, survive and thrive.

Prior research in Jordan’s lab tipped off the researchers to BDNF’s crucial role in supporting the pathways affected during Kennedy’s disease, and muscle samples from mice with the disease showed a sharp loss in BDNF.

“Given that we had a loss of BDNF, could we replace it and help slow the progression of Kennedy’s disease?” asked Halievski, who spent the next two years generating transgenic mouse models that produced extra muscle BDNF, carried Kennedy’s disease and were also male, a heroic feat given the probability was only 1 in 16 for each generation.

Once the models were ready, the first major phase of the study was designed to observe their motor behavior as the disease progressed.

“The first experiment would make or break the rest of the study,” Halievski said. “We were happy to find that increasing BDNF in muscle cells slowed disease progression by two times compared to animals without extra BDNF, and this is the point at which we could say we have a phenomenon—muscle BDNF is doing something.”

Next, Halievski zoomed in on the junction between the motor neuron and the muscle. She recorded changes in electrical signals in diseased mice with increased BDNF through electrophysiological techniques, an indicator of how the protein improved function at the cellular level.

“We used fine glass electrodes to quite literally listen in as the motor neurons and muscles worked after being exposed to BDNF during disease,” Jordan explained. “No one had ever done that before.”

What they discovered was that BDNF improved the function of slow and fast twitch muscles at different points in the pathway. For slow twitch muscles, the connection between the motor neuron and muscles were improved with increased muscle BDNF, a finding that lined up with the improvement in motor function.

“But for fast twitch muscles, BDNF did not help in the same way,” Halievski said. “It mainly improved their intrinsic strength and not the connection.”

Kennedy’s disease is known to dysregulate key genes involved in neuromuscular transmission, including molecular growth factors such as BDNF. Looking at the expression level of 13 different genes in both slow and fast twitch muscles confirmed that muscle BDNF acted on different mechanisms to improve their function.

“Not all muscles are designed the same way—they perform different functions,” Jordan said. “It was surprising to see that BDNF was combatting the effects of the disease in very different ways in these two types of muscles.”

The scientists hope the new, mechanistic understanding of BDNF their research provides will improve therapeutics for patients with Kennedy’s disease.