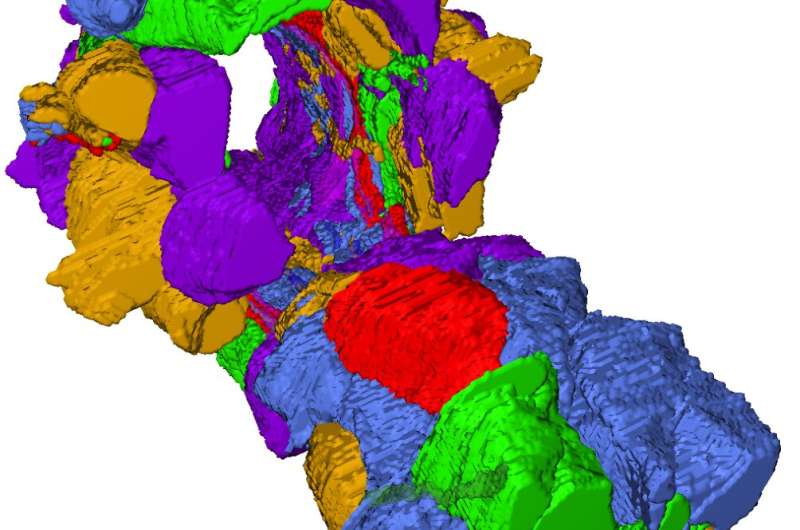 Researchers have mapped the physical organization of the brain of a microscopic soil-living nematode worm called Caenorhabditis elegans, creating a new model for the architecture of the animal’s brain and how it processes information.

In a surprise twist, they found a large degree of variation in the structure of some neural circuits or pathways in individual worms which complemented a core set of neural circuits common to different animals.

The scientists say the worms’ brains might have a lot more in common with larger animals than previously thought.

Created by neuroscientists at the University of Leeds in collaboration with researchers in New York’s Albert Einstein College of Medicine, the brain map reveals that different spatial regions support different specialized circuits for routing information in the brain, where information is integrated before being acted upon.

C. elegans are nematodes that feed on bacteria found in rotting vegetation in your garden. They are only around a millimeter in length and as thin as a human hair.

An adult worm has exactly 302 cells in its nervous system—by comparison, the human brain has around 100 billion cells. But almost two thirds of the worm’s nerve cells form a ring in the head region, where they make thousands of connections with each other.

This ‘brain’ is the control center of the animal, where much of the sensing and decision-making takes place.

Even though the brain is very compact, the animal displays a range of complex behaviors, and neuroscientists have been interested in understanding its brain for decades. Previous studies have created ‘wiring diagrams’ for the connections between nerve cells.

This latest study, though, is the first to provide the complete spatial coordinates to those circuit diagrams.

Professor Netta Cohen, Computational Neuroscientist at the University of Leeds, who supervised the research, said: “The brain needs to organize information flow to control the animal’s behavior. But how the structure and function of the brain are related is an open question. Providing the spatial representation of the circuitry has allowed us to uncover the modular structure of this animal’s brain.”

The researchers used a legacy collection of electron microscope images of the brain of an adult and juvenile nematode worm. Those images revealed individual brain cells or neurons, allowing the researchers to map the organization of the worms’ neural circuits, from the level of individual cells through to the large scale architecture of the entire brain.

Structure-function of the brain

The scientists identified known neural circuits and pathways within the brain such as a navigation neural circuit which an animal would use to follow smells and tastes to forage for food. Another circuit is thought to facilitate mechano-sensation, so it would feel its way as it wriggles through the soil—or sense if it is surrounded by bacteria.

Their theory is that information is processed in the worm’s brain through a number of ‘layers’. In fact, a similar layered architecture is found in the human brain. Information flow starts in sensory cells, which respond to the environment. For example, cells may sense bacteria but are they the right bacteria to feed on—do they smell like the ‘right’ bacteria? The answer requires information to be integrated from multiple senses before being sent to the command area of the brain for action.

Professor Cohen said: “The brain map reveals a very elegant structure to support information flow through a worm’s brain and it is more sophisticated than the traditional view that simple animals follow a stimulus-response path.

“The map suggests a convergence of different neural circuits—and this allows the worm to integrate all of the different cues it is receiving through its sensory cells and to coordinate the response.”

During their study, the researchers were surprised to discover the extent of individual variation in the worms’ brains.

C elegans is one of the most studied animals in biology. During the life of the worm, the way its cells divide and grow follows a strict blueprint which is observed across the entire species. But when it comes to the brain cells, there seemed to be a high degree of variation in the way the brain cells formed contacts with neighboring cells to create neural circuits.

Using mathematical and computer models, the scientists were able to discern between those connections that are likely to form the ‘core’ circuit across a large population of animals, and those that appear to be variable between individuals.

Dr. Christopher Brittin, a former Ph.D. student at the University of Leeds and first author on the paper said: “This work raises interesting questions about how even seemingly simple nervous systems are able to accommodate both core and individualized brain circuitry.”

The scientists found that only around half the wiring in the worms’ brains is similar—the other half showed variation.

Professor Cohen added: “This finding was really exciting for us. First, this suggests that worm brains have a lot more in common with the brains of higher animals than we knew or expected, and the lessons learned about worms can help us learn about brains more generally.”