Is this the cure for sleepless nights? Scientists believe ear zapper could help banish insomnia

Ear clips that stimulate a nerve in the ears could help treat insomnia. New research suggests that using the clips for just 30 minutes before you go to bed can improve sleep quality and reduce daytime drowsiness.

Scientists believe it works by stimulating the release of the sleep-inducing hormone melatonin.

One in three people in the UK suffers with insomnia at some point (insomnia is defined as the inability to fall asleep or stay asleep at night). 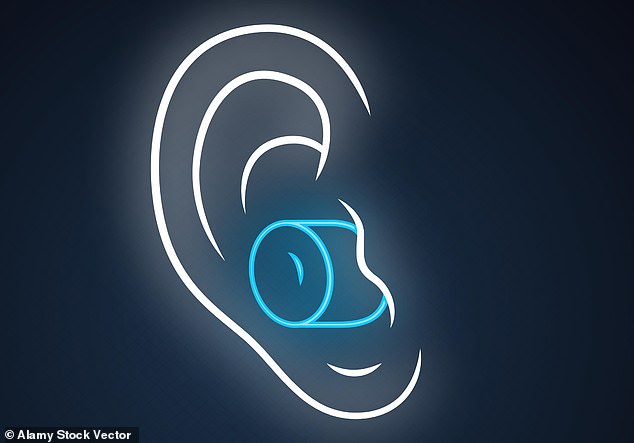 The most common causes include stress or anxiety, and shift work (which can disrupt natural sleep patterns). Alcohol and caffeine consumption are also factors: these can disrupt sleep as they act as a diuretic, making us want to urinate in the night, as well as relaxing muscles and causing heavy snoring.

An estimated one in ten people with insomnia ends up taking sleeping tablets, either prescribed or bought over the counter from a pharmacist.

Stronger drugs prescribed by GPs include so-called ‘Z’ drugs (the three main ones are zopiclone, zolpidem and zaleplon), which work by slowing the brain’s activity so it is easier to nod off.

However, long-term use of the drugs has been linked with worrying side-effects, including drowsiness (which raises the risk of falls and road traffic accidents), memory loss and aggression.

Patients can also suffer withdrawal problems when they come off them.

Now, scientists at Peking University in Beijing, China, believe the ear clips could offer a drug-free way to improve sleep.

The clips are connected by a wire to a small power pack about the size of a mobile phone.

When this is switched on, an electric current passes through the clips and into the ears to stimulate the vagus nerve. This is a major nerve that runs up through the chest and neck and into the brain and is involved in controlling a wide range of functions, including our sleep and wakefulness.

The clips are attached to the auricular concha — the shell-like entrance to the ear that leads towards the ear canal, where a branch of the vagus nerve can be found just beneath the skin.

In a trial, the scientists tested the clips on 63 volunteers with insomnia. Half were told to attach the clips to the auricular concha, the rest to the outer-edge of the ear where the vagus nerve does not pass near the skin.

Each person used the device for 30 minutes before bed for a month and kept diaries of their sleep patterns.

The results, in the journal Evidence Based Complementary and Alternative Medicine in August, showed that those who received vagus nerve stimulation had fewer problems nodding off by the end of the trial and were less drowsy in the day.

In just four weeks, their average scores fell by around two points on the Epworth Sleepiness Scale, which measures drowsiness.

Independent sleep expert Dr Neil Stanley, says: ‘This study is of interest but the number of patients involved was small. We need larger, better quality studies to show positive results before this can be used as a treatment.’

Researchers suggest it could have something to do with the effect poor sleep has on lifestyle choices. ‘Short and poor quality sleep [are] associated with less healthy eating and irregular meal patterns,’ they reported. 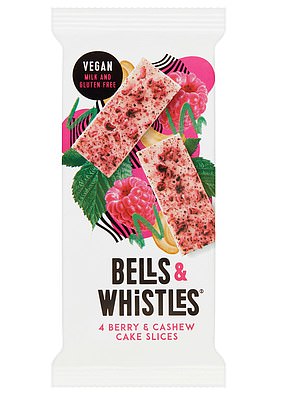 Bells & Whistles vegan cakes are just 120 calories per slice and free of the major allergens gluten, dairy and wheat.

A new pill could stop life-threatening anaphylactic reactions in people with drug or food allergies.

Further studies are needed, but, if successful, this would be the first known treatment to prevent anaphylaxis, reports the Journal of Clinical Investigation. ‘This pill could quite literally be life-changing,’ says researcher Bruce Bochner, a professor of medicine.

Certain types of gut bacteria may worsen the symptoms of multiple sclerosis (MS), suggests a study at the RIKEN Centre for Integrative Medical Sciences in Japan.

MS occurs when the body’s own immune cells attack nerve coatings. This interrupts the messages between the nerves and muscles, leading to symptoms such as numbness and difficulty walking.

Scientists have discovered blood thinners that avoid a key problem with current drugs — bleeding after an injury or surgery because the blood doesn’t clot enough.

Blood thinners or ‘anticoagulants’ are commonly prescribed for patients suffering from thrombosis (a blood clot that prevents normal circulation of blood) or stroke.

These drugs work by blocking enzymes that help stop bleeding, but can leave patients vulnerable after injury.

Scientists in Switzerland and in the U.S. have found the first synthetic inhibitor of a different enzyme (called FXII), without these complications, according to the journal Nature Communications.

Getting children to be physically active can help improve their ability to learn, according to a study from Kobe University in Japan.

Previous research has shown that physical exercise improves the activity in parts of the brain critical to learning. In the latest study, scientists analysed data from three trials that looked at the effects of physical activities, such as ball games, on cognition, including the child’s ability to focus, memorise facts and switch between tasks.

The research showed most improvement was seen in children whose skills had been lowest.

Eating soup regularly lowers the risk of being obese by 15 per cent, according to a study of more than 40,000 people reported in the journal Physiology & Behavior.

Soup is generally low in calories but a significant volume, and it is thought that this increases fullness, reducing additional food intake.

The research, published in Annals of Medicine, looked at almost 800 people without a history of diabetes over 20 years.

Participants had to squeeze a dynamometer (an instrument that measures hand grip) hard with their dominant hand for five seconds.

Results showed that for every unit of strength, the risk of type 2 diabetes was reduced by 50 per cent.

The researchers say hand grip may be a good way to identify who is at risk of the condition.

Health wonders that lie in your larder. This week: Spinach to ward off dementia

In a study, people who ate more green leafy veg, such as spinach, saw a significant reduction in the rate of cognitive decline, found scientists at Rush University in Chicago.

They tracked the diets and cognitive abilities of nearly 1,000 older adults for an average of five years.

Published in Neurology, the 2017 study found people who ate one to two 80g servings a day had the cognitive ability of someone 11 years younger than those who ate none.

Scientists believe the vitamin K in greens such as spinach, broccoli and kale is involved in maintenance of the myelin sheath that helps nerve cells communicate with one another.

Research has shown that patients with recently diagnosed Alzheimer’s had lower intakes of vitamin K.

Naturally occurring lithium in drinking water could help to stabilise mood and reduce rates of suicide, according to the British Journal of Psychiatry. Lithium, which is used in the treatment of bipolar disorder, was found to be beneficial after a review of 15 studies comparing regional suicide rates with lithium concentrations in water. 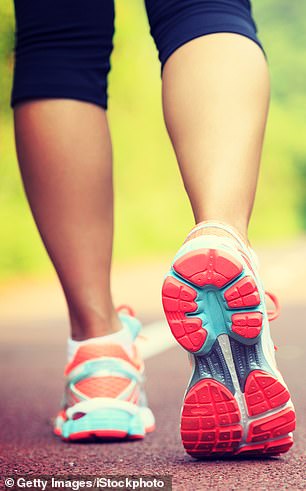 We look at neglected parts of the body — and how to make them stronger. This week: Your calves

‘No one ever comes to me and asks for strong, defined calves — but they should,’ says Kira Mahal, a personal trainer who runs MotivatePT in London.

‘The calf muscles are the powerhouse for lifting your heel off the ground when you walk and run, and ankles and feet need them for stability. Spending time on strengthening your calves helps prevent injuries in the lower leg.’

Do this exercise while you’re waiting for the kettle to boil: press the balls of your feet into the floor and rise up on to your tiptoes. Lower and repeat three sets of 15 repetitions.

Raise the intensity by doing them one leg at a time, or with your toes on a step so your heel drops lower than it.