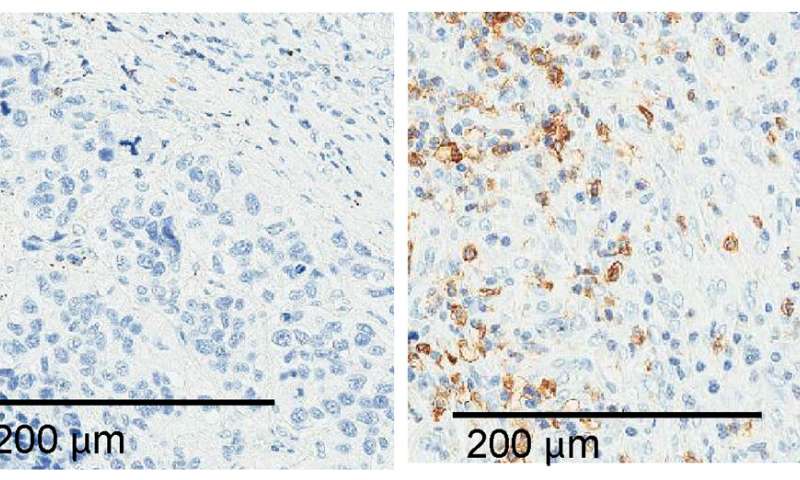 Researchers in Spain have identified a non-coding RNA molecule that helps lung cancer cells proliferate and avoid being killed by the body’s immune cells. The study, which will be published August 27 in the Journal of Cell Biology (JCB), suggests that targeting this RNA molecule could boost the effectiveness of immunotherapies that are currently only successful in ~20% of lung cancer patients.

Cancer cells accumulate many genetic alterations that help them grow and survive. Cancer researchers have generally focused on mutations altering genes and RNA molecules encoding cellular proteins. But many mutations affect other parts of the genome—long dismissed as “junk” DNA—that produce RNA molecules that don’t give rise to proteins, and the role of these non-coding RNAs in cancer is largely unknown.

Maite Huarte and colleagues at the University of Navarra in Pamplona analyzed over 7,000 tumors and found that many lung cancer cells contain extra copies of a gene encoding a long non-coding RNA (lncRNA) that the researchers named amplified lncRNA associated with lung cancer-1 (ALAL-1). These cells therefore produce more ALAL-1 RNA than normal. Huarte and colleagues found that lowering ALAL-1 levels reduces cancer cell proliferation and impairs tumor growth in mice. “Taken together, our data indicate that ALAL-1 is a functional lncRNA with a prooncogenic role in lung cancer,” Huarte says.

The researchers determined that ALAL-1 helps an enzyme called USP4 enter the cell nucleus, thereby altering the activity of over 1,000 different genes. In particular, Huarte and colleagues found that ALAL-1 reduces the production of a number of proinflammatory signaling molecules that would otherwise attract immune cells capable of killing the cancer cells.

Lung cancer patients with higher ALAL-1 levels, or extra copies of the ALAL-1 gene, were found to have fewer immune cells within their tumors. The researchers speculate that immunotherapies designed to activate anti-tumor immune cells, such as anti-PD-1 immune checkpoint blockers, might therefore be less effective in these patients.

“Our observations point to ALAL-1 as a possible target for lung cancer therapies and suggest that inhibition of ALAL-1 could have a ‘double-hit’ anti-tumor effect: on the one hand, by decreasing the autonomous capacity of cancer cells to survive and proliferate, and on the other hand, by promoting the ability of immune cells to infiltrate and attack the tumor,” Huarte says.