Pancreatic cancer is highly lethal: according to the National Cancer Institute, only about 10 percent of patients remain alive five years after diagnosis. Now, a preclinical study from the lab of Marsha Moses, Ph.D. at Boston Children’s Hospital, reports marked and lasting tumor regression in a mouse model, using a highly selective, potent, engineered antibody-drug combination.

The findings, published November 3 in the journal Advanced Science, provide the basis for further pre-clinical studies to advance this approach to the clinic, the researchers say.

Pancreatic cancer has proven very difficult to treat with drugs. Not only do the tumors have a limited blood supply, making it hard to deliver drugs, they are also surrounded by stroma (a dense connective tissue) and tumor cells are protected by an extracellular matrix (a meshwork of proteins and carbohydrates).

“It can be difficult to get drugs into these tumors,” says Moses, who directs the Vascular Biology Program at Boston Children’s. “We developed a novel chemo-immunotherapy agent that selectively recognizes and penetrates pancreatic tumors better than other therapeutics.”

Led by Jing Huang, Ph.D., the Moses lab developed an antibody-drug conjugate, or ADC, consisting of two parts: an antibody that selectively homes to a molecule on the surface of pancreatic cancer cells, known as ICAM1, and a drug toxic to cancer cells. Cells bearing ICAM1 on their surface are killed by the drug, while normal cells are spared.

“The size of the ADC is similar to the size of a single antibody: less than 10 nanometers,” says Peng Guo, Ph.D., of the Moses Lab, co-corresponding author on the paper with Moses. “Because of this ultra-small diameter, it can penetrate the stroma and reach pancreatic tumor cells better than other novel treatments such as T-cell immunotherapy or nanomedicines.”

Rational selection of antibody and drug

The team chose ICAM1 as a target for the ADC antibodies after screening the tumor surface for dozens of different proteins. In 2014, the Moses lab showed high levels of ICAM1 on triple-negative breast cancers, and it is abundant on melanoma and thyroid cancers as well.

The team performed similarly unbiased screening to select the best drug to include in the ADC. from a pool of drugs already used clinically. They tested four candidate ADCs in two human pancreatic cancer cell lines as well as in normal pancreatic cells. ADCs combining ICAM1 antibodies with the cytotoxic drug DM1 (mertansine), used clinically in HER2-positive breast cancer, were the most effective in killing tumor cells, working better than other ADC drugs. The DM1-ICAM1 antibody combination did not harm non-cancerous pancreatic cells which do not produce ICAM-1. 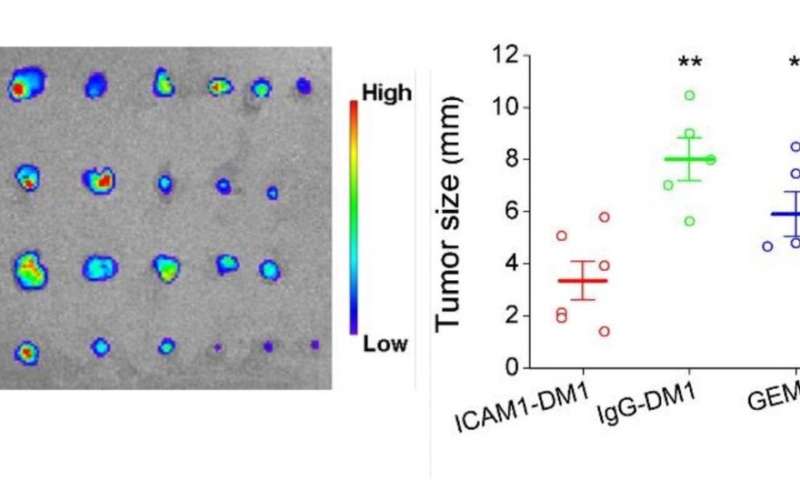 The team next randomized mice with pancreatic tumors to receive one of four treatments, given as systemic injections: the DM1-ICAM1 antibody conjugate, DM1 bound to a non-targeting antibody (IgG), gemcitabine (a first-line chemotherapy drug used in pancreatic cancer), or a sham treatment.

Compared with the other groups, mice receiving the DM1-ICAM1 antibody conjugate had a significant reduction in tumor size that persisted during the 14-week study, even after just two doses. The treatment also effectively inhibited metastasis to normal organs including lung, liver, and spleen. There was no observed toxicity, assessed by weighing the animals and through pathology analysis of their organs.

Finally, Huang developed an MRI-based molecular tumor imaging technique to complement ICAM1 ADC therapy, confirming the presence of ICAM1 on the tumor without the need for an invasive biopsy. This could potentially help to predict the treatment’s effect and monitor changes over time. Eventually, Moses hopes to be able to monitor the treatment effect using two non-invasive urinary biomarkers previously reported by the team.

While other ADCs have been tested in pancreatic cancer, none have shown sufficient efficacy in the clinic and have also resulted in off-target toxicity, says Moses. “The precision of our approach comes from both the specific targeting and the ability to monitor that targeting with MRI,” she says.