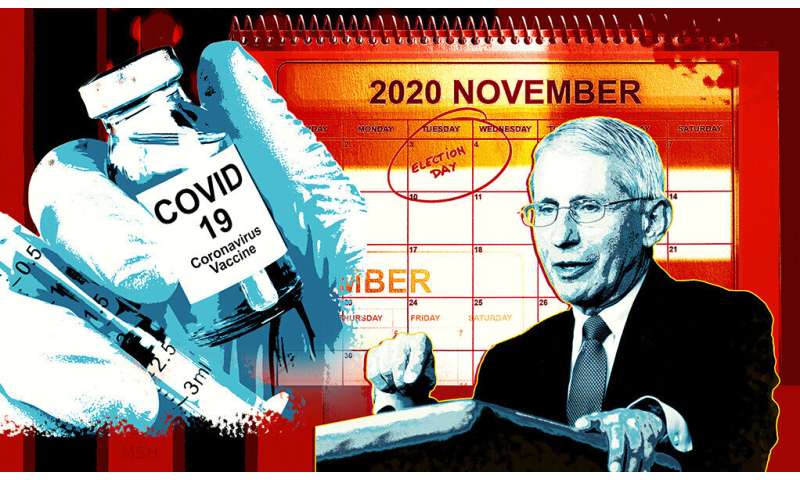 Public confidence in the safety and efficacy of a coronavirus vaccine will depend heavily on the political context in which a potential vaccine is approved and distributed, according to a new study by Yale researchers.

The study is based on two randomized, controlled survey experiments that measured the effects of the timing of a vaccine approval relative to the U.S. elections and the influence of vaccine endorsements by President Donald Trump, U.S. Speaker of the House Nancy Pelosi, and Dr. Anthony Fauci, one of the nation’s leading experts on infectious diseases.

The researchers found that the announcement of an approved vaccine one week before the election would significantly decrease people’s willingness to get vaccinated. The study also showed that, unlike that of the political leaders, Fauci’s endorsement increased confidence in a vaccine and willingness to be vaccinated among Democrats, Republicans, and independents.

“The value of any COVID-19 vaccine depends on people’s willingness to be vaccinated, and our work shows that politics has substantial influence on how the public perceives the quality of a new vaccine,” said co-author Alan S. Gerber, the Charles C. & Dorathea S. Dilley Professor of Political Science and dean of social science for Yale’s Faculty of Arts and Sciences.

Both surveys were conducted on nationally representative samples of voting-age U.S residents. The first experiment asked respondents to consider a vaccine with one of three approval dates:  Oct. 27, a week before the election; Nov. 10, one week after the election; and on Dec. 15. For each date, respondents were asked to indicate their likelihood of getting vaccinated within three months and their confidence in the vaccine’s safety and effectiveness on 5-point and 4-point scales, respectively.

“The politicization of vaccines, not just in the case of COVID-19 but also with regard to measles and many other diseases, is a key problem of public health where social science is essential for understanding the problem of persuasion,” said Saad B. Omer, director of the Yale Institute for Global Health and a co-author of the study.

An approval one week before the election decreased the likelihood that respondents would get vaccinated within three months of availability by 4.2 percentage points compared with their willingness to vaccinate if approval was announced on Nov. 10 (after the election), a 14% reduction. Meanwhile, a vaccine approval in December, compared with Nov. 10, increased willingness to vaccinate by 1.7 percentage points or a 6% increase, the survey found. A pre-election approval date reduced willingness and confidence among Democrats especially; a vaccine approved on Oct. 27 would reduce their “willingness” to vaccinate by 8.2 points, or 25%, and their “confidence” in such a vaccine by about 20%, relative to one approved one week after the election, the survey showed.

“It is encouraging that despite partisan conflict, public health experts still hold substantial sway with the mass public,” said Erin James, a postdoctoral associate at the Yale Institute for Global Health and co-author of the study.

The study found that a co-endorsement of a vaccine by Pelosi and Trump, versus contradicting statements by the two political leaders, had effects approximately one-third to one-half as large as an endorsement by Fauci. Respondents of all political affiliations indicated more willingness to get vaccinated if Fauci supported it rather than opposed it, but the effect was four times larger for Democrats than Republicans, according to the study.

In contrast to Fauci’s influence, Trump’s had a polarizing effect. A statement supporting a vaccine from the president raised confidence among Republicans about as much as Fauci, but sharply lowered confidence among Democrats and had no effect among independents. Pelosi’s impact was concentrated among Democratic respondents, with effects near zero for both Republicans and independents, the study found.

Scott E. Bokemper, a resident postdoctoral fellow with Yale’s Institution for Social and Policy Studies and the study’s lead author, noted that despite Fauci’s bipartisan appeal, his position appears to be somewhat affected by the contemporary political landscape.

“We did find that Democrats were more willing than Republicans to heed Fauci’s advice, but overall, our findings indicate that messaging on vaccines is most effective when it comes from experts, not politicians,” he said.