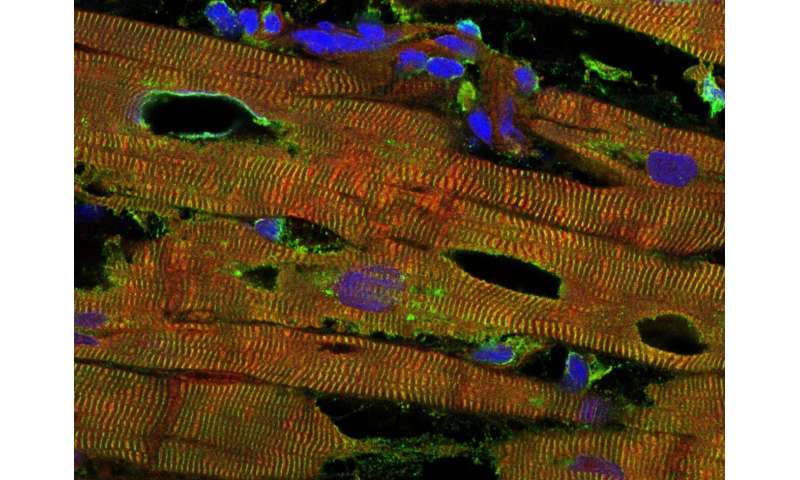 A healthy heart beats 50 to 100 times a minute and pumps 8,000 liters of blood around our body every day. A precondition for this function is the elasticity of the cardiac walls, which dilate as blood flows in (diastole) and contract again as the blood flows out (systole). Millions of tiny cavities in the heart muscle fibers, the sarcomeres, are responsible for this movement. These contractile units contain the largest protein found in the human body called titin. It has the function of a mechanical spring, which develops a restoring force during the extension of the sarcomeres—just like a rubber band.

Working with researchers from the Universities of Bochum, Würzburg, Cologne, Regensburg, Göttingen and Düsseldorf, a team of researchers at the University of Münster headed by Prof. Wolfgang Linke, Director of the Institute of Physiology II, has now discovered that oxidative stress, in combination with the stretching of the heart walls, triggers a change in cardiac stiffness. The elastic titin in the sarcomeres is more strongly oxidized and, as a result, is modulated in its extensibility. The researchers call this newly discovered mechanism UnDOx (“unfolded domain oxidation”). The study has been published in the journal PNAS.

In the human organism, titin forms the backbone of the sarcomeres, the smallest functional units of the skeletal muscles and the heart. Titin provides both stability and elasticity to muscle cells, due its unique structure. For the first time, the research team has now shown in heart tissue of mice that oxidative stress together with the extension of the heart modulates the spring function of titin. Oxidative stress occurs when too many reactive oxygen species are present in the cell of an organism. These oxygen species, which include so-called free radicals, can cause cell damage. In small quantities, however, they regulate important physiological functions.

The researchers used a mass spectrometer to determine the oxidation status of the proteins in the heart, including titin. Additionally, they isolated heart muscle cells from deep-frozen tissue of a human heart and attached them to a force sensor and a micromotor, in order to stretch the specimens. This enabled them to measure the forces generated upon stretch and observe their increase or decrease during different forms of oxidative stress. In addition, the team produced recombinant titin molecules and also mutated them in a test tube, such that oxidation could no longer occur. “We then used a so-called atomic force microscope to directly measure the effects of stretch and oxidation on the titin spring,” Wolfgang Linke explains. “Using this device, we were able to stretch individual titin molecules like a rubber band and record the force upon extension , as well as the changes in force in the presence of an oxidant.”