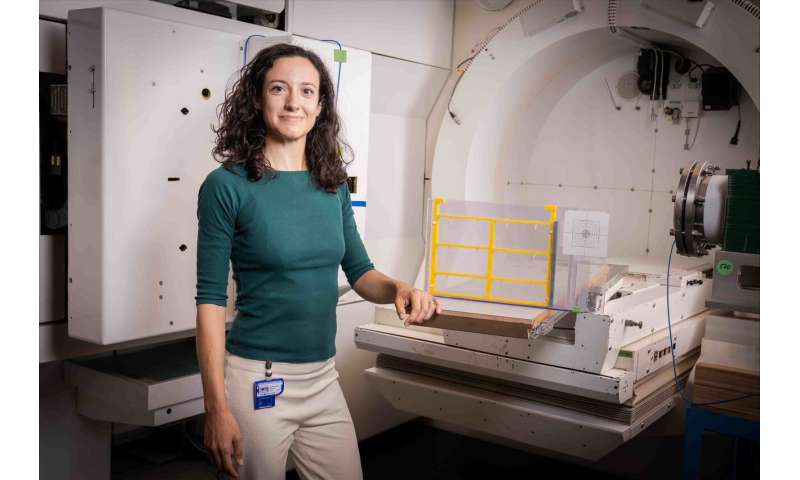 For the first time, researchers at the Center for Proton Therapy at the Paul Scherrer Institute PSI in Switzerland have tested ultrafast, high-dose irradiation with protons. This new, experimental FLASH technique could revolutionize radiation therapy for cancer and save patients many weeks of treatment.

In nature, lightning strikes with a short, strong flash of light and a high energy discharge. In radiation medicine, FLASH also stands for ultrashort, high-dose, one-time irradiation, and in the future it could save patients many weeks of treatment. At the Center for Proton Therapy CPT, PSI researchers are testing whether FLASH is also suitable for proton irradiation using the spot-scanning technology developed at PSI. For their experiments, CPT head and chief physician Damien Weber and his team at PSI are collaborating with the Center hospitalier universitaire vaudois (CHUV) in Lausanne. There, with the approval of the Swiss Academy of Medical Sciences (SAMS), the only patient in the world to date has been irradiated using the FLASH technique in order to heal a malignant tumor in the skin. Unlike at PSI, the researchers at CHUV use electron beams. These are only suitable for very superficial tumors. In contrast, the protons used at PSI also reach tumors deep inside the body and can be stopped precisely at the site in the body where they should have their maximum effect on the cancer cells.

“If we can achieve the high precision and the good outcome of proton therapy with FLASH irradiation without damaging healthy tissue, this would be a huge step forward,” says Damien Weber. Treatments could be much shorter and less stressful for patients. “If the principle works, the patients would only have to come for radiation treatment a few times, ideally only one to five times. The treatment appointments that open up as a result would be available to other cancer patients.” Because of the extremely short irradiation, it is even possible to use the FLASH technique to treat tissue in the lungs, which changes its position with every breath. However, before the process is technically mature enough to be used routinely with patients, it will take many years of technical development and a great many tests. With FLASH, a radiation dose rate of up to 1,000 gray per second is applied; that is a radiation dose per second roughly a hundred times higher than in the usual treatments. This destroys the tumor cells very effectively. “But first and foremost, we need evidence that proton irradiation with the FLASH technique does not damage healthy body tissue,” says Weber.