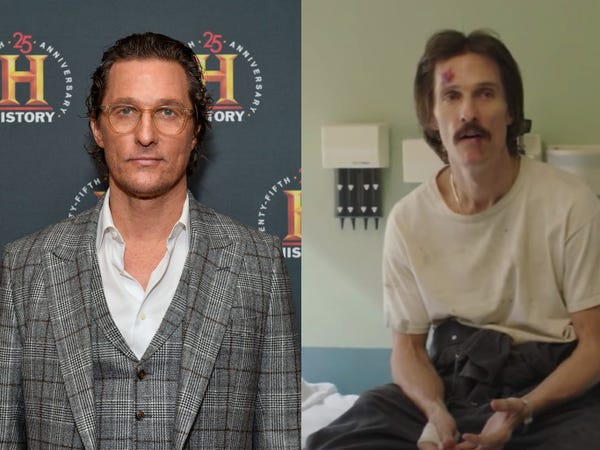 "Dallas Buyers Club" actor Matthew McConaughey has shared how he lost 50 lbs for the role.

His unusual approach involved eating nothing but fish, egg whites, tapioca pudding — but including "as much wine as I wanted to drink."

"I did not torture myself. I was militant. The hardest part was making the damn choice," McConaughey said on an episode of The Joe Rogan Experience, which aired on October 22.

McConaughey played Ron Woodroof, a man who was diagnosed with stage 4 HIV/AIDS in the mid-1980s.

The actor told Rogan he wanted to lose all the weight to show the reality of living with advanced stages of HIV as he paid homage to Woodroof's life and legacy in detail.

"It was my responsibility," McConaughey said. "If I looked how I look now and played Ron Woodroof from 'Dallas Buyers Club,' you are out of the movie the first frame."

McConaughey went from his usual 188 lbs to 135 lbs in five months.

The actor said he would eat 5 oz of fish for lunch and dinner, small amounts of vegetables with each meal, and egg whites for breakfast. His daily treat would be a small amount of tapioca pudding.

"I found tapioca pudding and I found the tiniest little antique spoon in New Orleans, a little bitty sugar spoon, and I would eat it with that so it would last longer," McConaughey told a crowd of reporters at the 2014 Screen Actors Guild Awards.

Fish is commonly cited by dietitians as a lean, low-fat source of protein helpful for people looking to lose weight. Vegetables are also considered one of the best weight-loss foods as they are a low-calorie source of fiber and nutrients.

Jumping from the calorific diet McConaughey was likely eating to build muscle for his role in "Magic Mike" (which required washboard abs) earlier in the year to this low-calorie diet would also have dramatic results.

The actor also rarely exercised during this period of time, as it seemed to make no difference in his weight loss. Cutting out muscle building workouts like lifting weights can decrease your muscle mass, leading to a drop in weight on the scale.

"It didn't matter if I was going to the treadmill and burning 2,000 calories a day or not, 2.5 lbs a week," McConaughey said.