How dare the NHS throw us on the scrapheap! Four pensioners fight back against the draconian NHS policy that sees over-65s assessed for frailty and slapped with a DNR

They enjoy life to the full and don’t want their days to end on the whim of a doctor’s signature.

These four pensioners are bravely fighting back against a draconian NHS policy that sees over-65s assessed for frailty and handed notices saying they will be denied resuscitation if they suffer a heart attack or stop breathing.

Bob, Peter, Stella and Shirley have all told the Mail they were slapped with a DNAR (do not attempt resuscitation) order against their wishes.

They are among hundreds of people who have written to tell us that DNARs were wrongly put on their medical files or those of their loved ones.

All too often it seems these orders have been handed out secretly by NHS staff without the patient’s consent or even their knowledge. 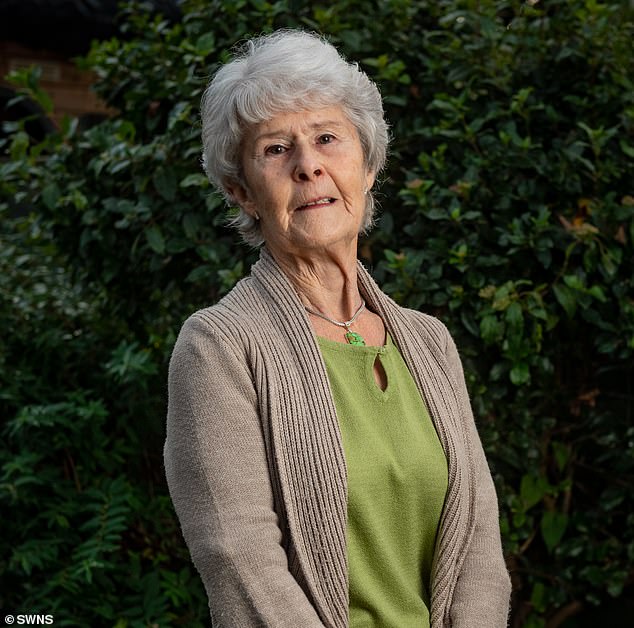 Stella Clarke, 77,  retired as a hairdresser only last year and coaches youngsters to national level at her bowls club

These four pensioners — and many others — seem to have been ensnared in a no doubt well-intentioned new NHS project to help older people live independently at home towards the end of their days, rather than receiving care in hospital.

This drive follows the much-hated Liverpool Care Pathway, scrapped in 2014, which denied patients water when they were dying in hospitals, care homes or hospices.

Now NHS England plans to give everyone aged over 65 a ‘national frailty score’.

Official figures show that one in ten of the 12 million in this age group is frail. Among the over-80s, the proportion rises to 50 per cent.

The new programme involves a ‘geriatric assessment’, sometimes by phone. Some have complained that it represents ‘euthanasia by the back door’ and say they are now afraid to see the doctor or go to hospital.

The letters and emails flooded in after we revealed the experience of Lucy Jeal, 93, who in September opened the door of her South London council flat to a ‘frailty nursing practitioner’.

After an hour-long conversation, Lucy was told she would be sent a DNAR because she is frail.

The next day the red-lined order arrived by post, signed by a consultant in geriatric care at nearby Guy’s and St Thomas’ Hospital and the frailty nurse who had visited.

Lucy was expected to put the order on her wall to warn ambulance crews, paramedics and doctors not to resuscitate her.

Lucy, who goes out walking each day and does her own shopping, says she never agreed to it and is now frightened. Her son Raymond, 66, was equally disturbed and has told Guy’s and St Thomas’ to remove the DNAR from her file.

Health watchdog the Care Quality Commission, alerted by the Mail, has said it will contact Lucy and her family to investigate her disturbing case. 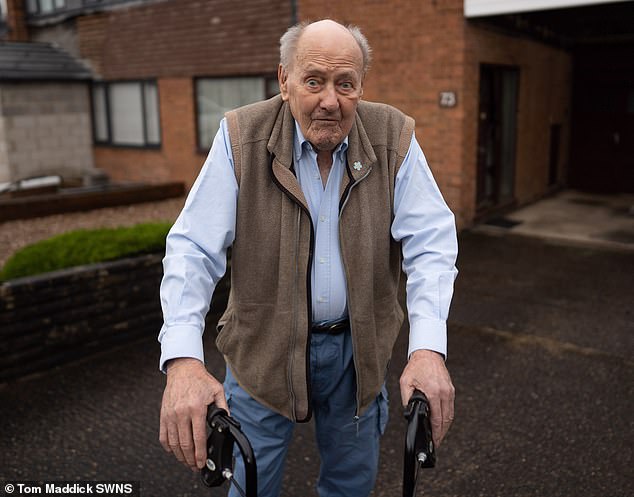 The 80-year-old former magistrate is a fearless adventurer on water, even though he can’t swim. But when he found a sealed envelope in his bag after an overnight visit to Dorset County Hospital in May, for once he felt frightened.

Bob was admitted for checks after a trapped nerve in his leg caused a fall in the shower. As he packed his belongings before being discharged, a female consultant rushed into the room, repeatedly saying the word ‘resuscitation’.

Bob claims she was flustered.

‘She said: ‘You realise if we have to resuscitate you at any time, you’ll have severe brain damage . . . end up as a cabbage in a care home’,’ he says.

‘I thought she was joking. I told her anything is better than death. I thought nothing of the brief conversation.’

Yet to his horror, an hour or so later, back at his waterside apartment in Weymouth, Bob found a Do Not Attempt Resuscitation (DNAR) notice in an envelope under his carefully folded clothes at the bottom of his bag. 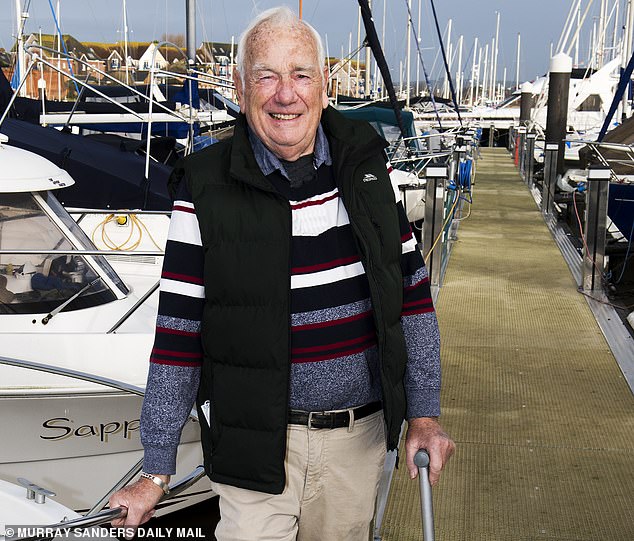 Pensioner Bob Russell, 80, who is a former magistrate, spends five hours each day at sea on his small motor boat, the Mad Hatter

He says it had been slipped in there by hospital staff and signed by the consultant without his knowledge or consent.

‘It meant days and days of worry. It shook me rigid,’ he says. ‘When you’re just leaving hospital, to be told that you are all right, then bang — they hit you with that.

Bob says his health is good. His only serious crisis was a heart attack on Christmas Eve four years ago, after which the former commercial manager at Southampton Football Club was fitted with five stents and a pacemaker.

‘If you eat right and keep active, you can get over these things,’ he says.

Most days, he boats for ‘six or seven miles’ off Portland Harbour, past landmarks such as the National Sailing Academy, HMP The Verne and even the occasional cruise ship that dwarfs his 20ft boat with its 75hp outboard motor.

It is an incredible retirement playground for the former merchant seaman, who bought the Mad Hatter eight years ago.

Of the fact that he can’t swim, Bob jokes: ‘One day I’ll fall in. I just hope someone is around.’ He adds: ‘I’ve got eight grandchildren and I want to live to see each one married.’

Bob has fought successfully to have the DNAR removed from his medical notes, after numerous calls and letters to Dorset County Hospital and his GP.

The hospital has since apologised by letter.

Stella Clarke can’t wait to get back to playing lawn bowls six times a week, as she did before the pandemic.

Sprightly at 77, she ‘walks everywhere’, she says, and retired as a hairdresser only last year.

She coaches youngsters to national level at her bowls club and also makes jewellery, which she sells or gives to charities near her home in Worcester.

So she was shocked to get a phone call in April from a female GP at her local surgery whom she did not know. ‘She said: ‘What would you do if you got Covid-19?’ ‘ says Stella. 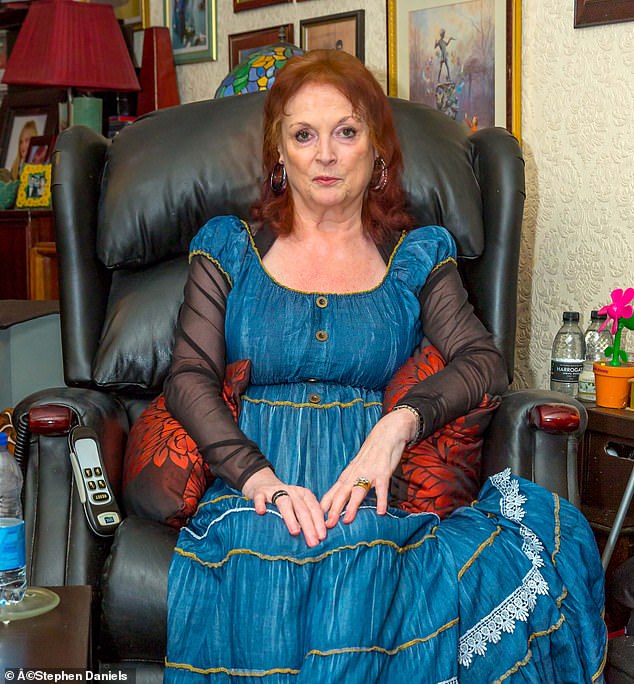 After going in for an operation at hospital, Shirley Howe, 74, and her family were shocked to learn that during her recovery, doctors ‘signed her death warrant’, as she puts it, in the form of a DNAR notice

‘I answered that I’d stay at home. I hadn’t given it much thought.

The doctor said: ‘I’ll put ‘Do not resuscitate’ on your medical records then.’

Stella, who last used the NHS ten years ago for successful eye surgery, told the doctor politely that she disagreed. She wrote a letter to the surgery insisting that she did want to be resuscitated if she became ill.

She also wrote to her MP Robin Walker and Health Secretary Matt Hancock about what she claims is ‘legalised murder’ of the elderly. She says neither has replied.

This week, Stella showed us letters between her and the doctor which, to her relief, resulted in the plan for a DNAR notice being abandoned.

She says: ‘The medical people think the old are defenceless. I believe these orders are handed out to the over-65s because we are seen as costing the NHS too much if we go to hospital.’

Peter Jones wants to watch his six great-grandchildren grow up. During the lockdowns, his family have sent him photos of the youngsters and he can’t wait to see them again at his house in Dronfield, Derbyshire.

Yet in an out-of-the-blue phone call in June this year, a doctor told him a DNAR would be going on his medical records.

Peter, 94, then received a letter from his GP surgery. Covered in what he calls ‘blood-red’ lettering, it said he would not be rescuscitated if his heart gave out or his breathing stopped.

‘The doctor who called had never met me,’ says Peter. ‘He asked me questions about end-of-life care. Then he asked: ‘You wouldn’t want to be resuscitated, would you?’ I told him yes — I am having a great life.’

The former government skills instructor and master carpenter, who also served in the Parachute Regiment, was shocked.

‘The letter with the DNAR said it was because I was frail,’ he says. ‘I jumped up and down! I rang the GP surgery and said, bring that doctor round here and let him see me for himself. The DNR letter was the opposite of what I had told this doctor.’

Peter had cancer ten years ago, for which he had surgery. He is in remission but walks with the help of a wooden stick, which he carved himself.

He looks after his partner, Carmen, 77, who has dementia and is visited in their home by carers.

‘Funnily enough, my cancer specialist has sent me a three-page document advising me on how to stay healthy during the pandemic,’ adds Peter, ruefully.

After Peter’s protest, the GP surgery agreed to remove the DNAR notice from his file.

Shirley Howe had her hair washed and set so she would look presentable in hospital, where she was going for an operation.

After the procedure, the glamorous grandmother was soon up and about and sharing make-up tips with her nurses.

She and her family were shocked to learn that during her recovery, doctors ‘signed her death warrant’, as she puts it, in the form of a DNAR notice, after concluding that ‘I was not worth saving’.

Her family later found out it had been signed four days before Shirley entered hospital in March 2018, prompting them to believe it was meant for another patient on the ward with the same name (although the hospital disputes this).

The DNAR could have had devastating consequences. Shirley, now 74, is still distressed by the events. ‘They told me to keep it in a safe place and if I ever went to hospital again, to give it to the ambulance driver — so in other words, they were not to bother with me,’ she says.

Shirley, who has four children, seven grandchildren and six great-grandchildren, had been admitted to Lincoln County Hospital for an operation to remove part of her colon, following a stage one cancer diagnosis. It was a procedure she had chosen to have, which had been cancelled four times.

Apart from suffering from diabetes and chronic obstructive pulmonary disease — both common in the elderly — she is in good health.

A few days later, when her husband Michael and barrister daughter Sara-Lise were visiting, a consultant came to speak to her and them about her care.

Sara-Lise recalls that he asked them what should happen ‘if it all goes wrong’.

She thought no more about the conversation — but then found the DNAR notice in her medical notes. ‘If my breathing had got difficult, they would have let me die,’ she says.

Sara-Lise drew a line through the form, demanding its removal.

Michael, Shirley’s husband of 54 years, wrote protesting to the hospital, which has since withdrawn the DNAR and apologised for the distress caused and ‘significant failings’ in its communications with Shirley.

Sound familiar? Get in touch by emailing elderly athome@dailymail.co.uk