AstraZeneca shot found to be 79 percent effective in trials

Researchers say there is mounting evidence suggesting that hearing loss and other auditory issues are strongly associated with COVID-19 infection, according to a systematic review.

At least one clinical study is ongoing, but using data from 24 concluded studies that mostly relied on self-reported questionnaires or medical records, researchers from the University of Manchester and NIHR Manchester Biomedical Researcher Center found that up to 7.6% of COVID-19 patients suffered from hearing loss, 14.8% complained of tinnitus and 7.2% reported vertigo.

In their review, published in the International Journal of Audiology, researchers said the data calls for more focused studies comparing COVID-19 cases with controls, “such as patients admitted to hospital with other health conditions.”

HEARING LOSS WILL AFFECT 1 IN 4 PEOPLE BY 2050, WHO ESTIMATES

“Though caution needs to be taken, we hope this study will add to the weight of scientific evidence that there is a strong association between COVID-19 and hearing problems,” The University of Manchester’s Ibrahim Almufarrij, said, according to EurekAlert.org.

Another researcher involved in the review said that many patients have been emailing to complain of hearing issues after COVID-19, underscoring the “urgent need” for diagnostic study.

“Over the last few months I have received numerous emails from people who reported a change in their hearing, or tinnitus after having COVID-19,” said Kevin Munro, professor audiology at The University of Manchester who is leading the ongoing year-long study. “While this is alarming, caution is required as it is unclear if changes to hearing are directly attributed to COVID-19 or to other factors, such as treatments to deliver urgent care.”

The calls coincide with growing urgency to study the symptoms and effects of long-COVID, or symptoms that don’t go away once the infection clears.

Tinnitus, according to the National Institute on Deafness and Other Communications Disorders (NIDCD), is commonly described as ringing in the ears, but also can be described as roaring, clicking, hissing or buzzing. It can be soft or loud, high pitched or low pitched, and it might be in one or both ears. 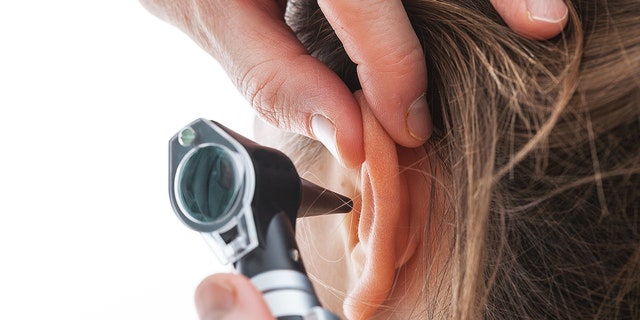 A researcher involved in the review said that many patients have been emailing to complain of hearing issues after COVID-19, underscoring the "urgent need" for diagnostic study.
(iStock)

Tinnitus typically occurs when something goes wrong with the auditory system, which could range from a piece of earwax blocking the ear canal to something more serious such as noise-induced hearing loss, ear and sinus infections, diseases of the heart or blood vessels, brain tumors, hormonal changes in women or thyroid abnormalities, among others.

It can also be a side effect of certain medications.

On Sunday, the family of Kent Taylor, founder and CEO of Texas Roadhouse restaurant chain, said that he took his own life after suffering from symptoms related to COVID-19, including severe tinnitus.

Taylor had recently committed to funding a clinical study to help military members suffering with tinnitus. According to the NIDCD, service members exposed to bomb blasts can develop tinnitus if the shock wave of the explosion squeezes the skull and damages brain tissue in areas that help process sound.

For some, it can be a source of mental and emotional anguish as it may not go away for periods of time.

“Kent battled and fought hard like the former track champion that he was, but the suffering that greatly intensified in recent days became unbearable,” the statement said.

Editor’s note: If you or someone you know is having thoughts of suicide, please contact the National Suicide Prevention Lifeline at 1-800-273-TALK (8255).