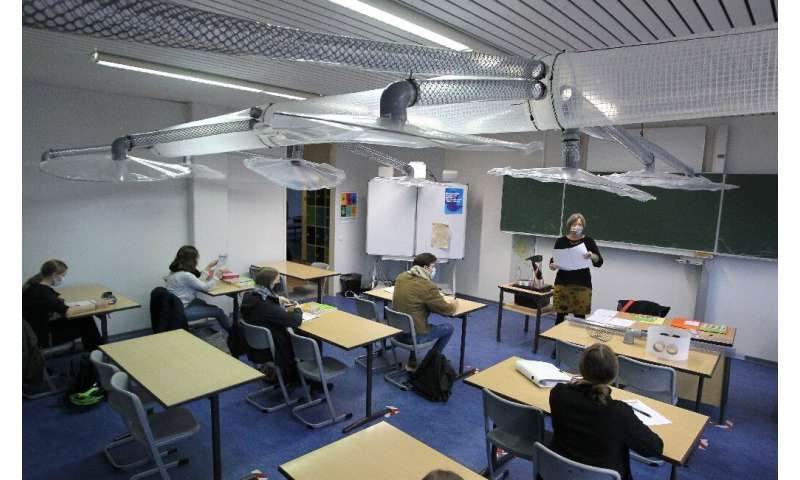 Keeping the windows open to combat COVID-19 is easier said than done as winter approaches. One German school believes it has found a cheap and simple solution with a DIY ventilation system designed by a teacher’s scientist husband.

“It works like a kitchen extractor fan,” said inventor Frank Helleis, standing in a classroom at the IGS Mainz-Bretzenheim secondary school.

Above every desk hangs a clear plastic funnel attached to a narrow pipe, with all the pipes in turn connected to one wide pipe leading to a fan that directs the air outside through a tilted window.

Warm breath exhaled by the pupils, potentially carrying virus-laden tiny particles known as aerosols, rises up overhead and is sucked through the tubes and pushed outside before it can spread through the room.

Another window is kept ajar to allow in fresh air.

Tests carried out by the prestigious Max Planck Institute for Chemistry, where Helleis works, have shown the system manages to remove over 90 percent of aerosols from the room, on par with the most high-tech air filtration units on the market.

The difference is that Helleis’ light-weight contraption can be built from materials from the do-it-yourself store for around 200 euros ($235).

A handful of volunteers put it together in half a day, he said, and the Max Planck Institute has shared the assembly instructions online for anyone who wants to copy the idea.

The timing could scarcely be better. 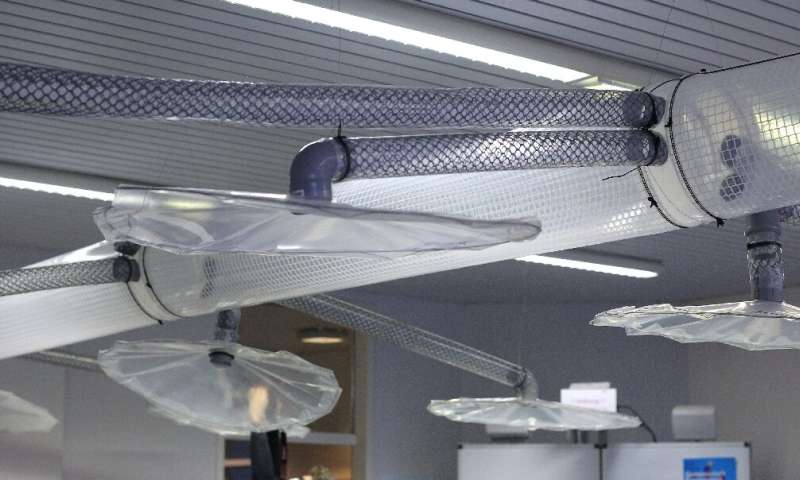 Germany’s coronavirus numbers have been climbing at an alarming rate and regularly airing out classrooms is considered key to keeping schools open—regardless of the weather outside.

Sophia Wettig, 18, keeps an extra jumper in her locker. She said she finds it hard to concentrate in the cold and it was “pretty cool” her school had come up with a warmer solution.

“It’s more pleasant being here than in other rooms,” she told AFP from behind a face mask, which she and her classmates keep on during lessons.

Helleis has already received almost 3,000 inquiries about the ventilation system, and expects it will be rolled out in many more schools.

The inspiration came from brainstorming with his colleagues about how they could help in the pandemic.

“We figured the best thing to do was to carry out the trash,” he said, referring to being rid of any virus-carrying aerosols.

Because his wife teaches at IGS Mainz-Bretzenheim, he reached out to headmaster Roland Wollowski who, as a scientist himself, was immediately on board.

His school in western Germany happens to be just a five-minute drive from another Mainz institution making headlines, the BioNTech company leading the race for a COVID-19 vaccine.

The official guidance from Germany’s federal environment agency is for schools to open windows for several minutes every 20 minutes to reduce the infection risk. 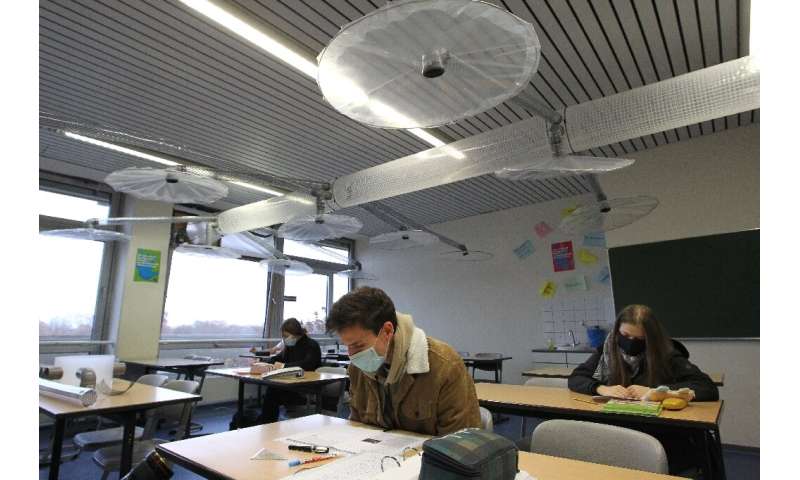 But not all of Germany’s roughly 40,000 schools have windows that fully open, and confusing advice about air purifying machines and other alternatives has left many educators scratching their heads, said Heinz-Peter Meidinger, president of the German Teachers’ Association.

The association has been “overrun” with offers from firms trying to sell their air filtration systems, he said, with prices swinging from 1,500 to 6,000 euros per unit.

Politicians have been slow to address schools’ concerns about aerosols, probably because many options are “too expensive”, he told AFP.

Under Germany’s federal system, responsibility for schools lies with each of the country’s 16 states.

The regional government in wealthy Bavaria has committed 50 million euros, although Meidinger expects that will also be spent on low-cost tools like CO2 readers that alert teachers when it’s time to air a room.

Helleis says portable air purifiers equipped with high-efficiency filters can be useful in schools, but are more expensive, noisier and more energy-consuming than his prototype.

And unlike his invention, they don’t also remove CO2 from the room, which has been blamed for causing tiredness, giving schools a reason to keep his homemade system even after the pandemic.

Headmaster Wollowski plans to spend the next few weekends installing Helleis’ system in all the school’s classrooms, helped by parents, teachers and pupils.