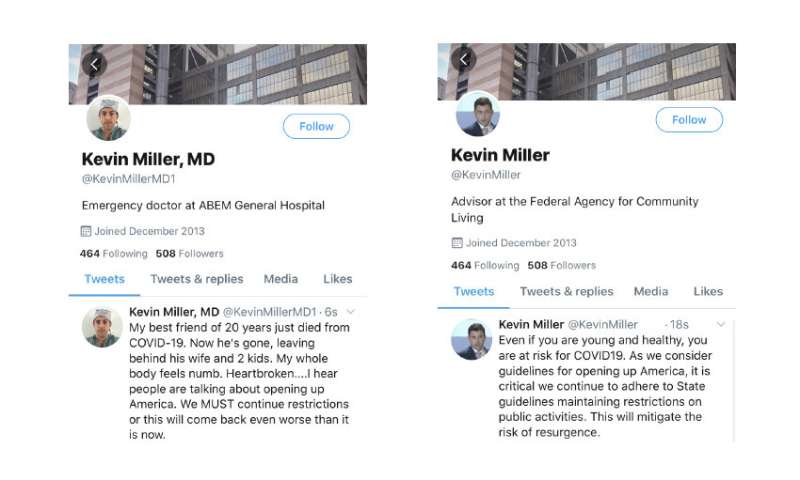 Anyone who’s on social media right now has probably seen them: Passionate pleas from health care workers, asking for the public to realize how bad the COVID-19 pandemic has gotten, and urging them to take steps to slow the spread of coronavirus.

But do these first-person posts from the heart actually have any effect?

A new study suggests so.

A personal appeal from an emergency physician, asking for the public’s help based on something they’ve experienced, carries more weight with a general audience than an appeal from a federal official that says the same thing in an impersonal way, the randomized online study finds. It also outpaced a more straightforward message from the same doctor.

In terms of whether the social media posts would be shared by the viewer, on average, study participants were more likely to say they would share either kind of post from an emergency physician than those from a federal official.

The difference in effectiveness was the same for people across the spectrum of ages, incomes, genders, racial and ethnic backgrounds, political persuasions and health status.

Writing in the journal Academic Emergency Medicine, a team from the University of Michigan and their colleagues report the results of a study that included more than 2,000 people in a nationally representative online sample.

All were randomly shown one of four simulated Twitter posts by a fictional emergency physician or a fictional public agency official, and asked to rate its effectiveness, and its potential effects on their views about taking steps to prevent the spread of the virus.

They also were asked how likely they would be to share the post if they saw it, and how likely it was that it would prompt them to write a letter to their governor or pledge to stay home to prevent the spread of the virus.

Lead author Rachel Solnick, M.D., M.Sc., an emergency physician at Michigan Medicine, U-M’s academic medical center, says the study—conducted in late spring—was inspired by her own reaction to seeing tweets from her fellow physicians in the first months of the pandemic.

“This is a challenging media environment, with a lot of misinformation and doubt about who to trust,” she says. “Our study confirms that a personal perspective from someone who is seeing the pandemic’s effects first-hand can be a trustworthy voice. Emergency physicians, in particular, have a place in the public’s sentiment, and we can step up and contribute our lived experience for the public good.”

Solnick and her colleagues from U-M’s Institute for Healthcare Policy and Innovation, where she is a National Clinician Scholar, took care to not include any information that might identify a particular patient.

Respecting the HIPAA medical privacy law by speaking generally and making it clear that the individual is speaking for themselves and not representing their institution’s official position is paramount, she says.

The study’s simulated personal tweet didn’t reference a patient, but rather said that the physician or official’s “best friend of 20 years just died of COVID-19” leaving behind a family. It went on, “I hear people are talking about opening up America. We MUST continue restrictions or this will come back even worse than it is now.”

The non-personal simulated tweets used an exact quotation from a postcard that was sent in late April to millions of American households by the federal government, in addition to language from other White House documents.

It said: “Even if you are young and healthy, you are at risk for COVID19. As we consider guidelines for opening up America, it is critical we continue to adhere to State guidelines maintaining restrictions on public activities. This will mitigate the risk of resurgence.”

In the end, none of the tweets had an impact on pledging to stay home, which most participants were already willing to do at that point in the pandemic, nor on their likelihood of writing a letter to their governor asking them to keep the restrictions in place.

All four simulated tweets had profile images that showed a relatively young white male. Solnick’s other research has explored the impact of the race and gender of emergency physicians on patients’ perceptions and willingness to act on their advice, and she hopes future research will investigate strategies to mitigate pandemic misinformation and how characteristics of the messenger may play a part.

While Solnick and her colleagues had thought they would see differences among respondents in their views of the simulated tweets, there was no clear difference. This suggests, she says, that keeping politics out of personal tweets by health providers is advisable, because of the politicization of the public health threat.