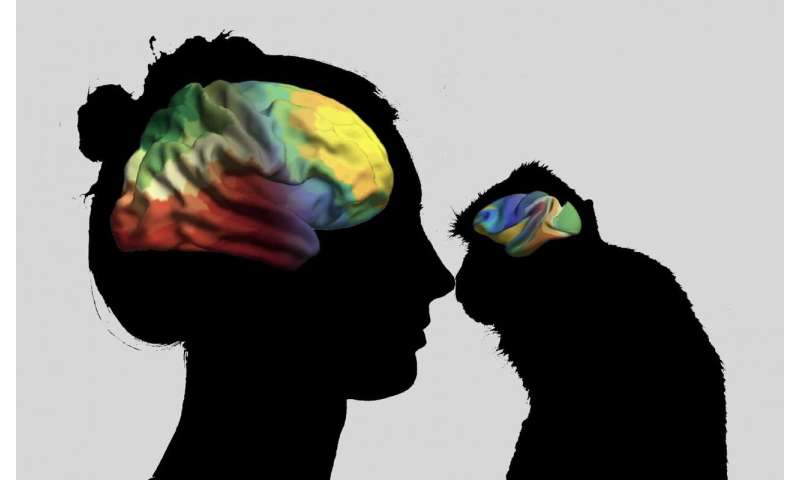 The location of a country on the earth says a lot about its climate, its neighboring countries, and the resources that might be found there. The location therefore determines what kind of country you would expect to find at that point.

The same seems to apply to the brain. Every network is located at a certain place, which determines its function and neighbors but also the kind of function that occurs there. However, the rules that describe the relationships different brain regions have to each-other were not well understood until now. Scientists at the Max Planck Institute for Human Cognitive and Brain Sciences in Leipzig, Germany, and the Forschungszentrum Juelich, together with an international team of collaborators, have deciphered two axes along which the human brain is organized. It was found that these axes are mainly determined by genetic factors.

One axis stretches from the posterior (back) to the frontal part of the cortex. This reflects a functional hierarchy from basic capabilities such as vision and movement to abstract, highly complex skills such as cognition, memory, and social skills. A second axis leads from the dorsal (upper) to the ventral (lower) part of the cortex. Whereas the ventral system has been associated with functions assigning meaning and motivation, the dorsal system may relate to space, time, and movement.

“Interestingly, this vertical arrangement aligns with the long-held hypothesis of dual origin,” says Sofie Valk, research group leader at the MPI CBS and Forschungszentrum Juelich and first author of the study, published in Science Advances. According to this hypothesis, the cerebral cortex developed from two different origins, the amygdala and olfactory cortex on the one hand and the hippocampus on the other hand. From these origins two different lines of cortical development arose, reflecting waves from less to more differentiated areas starting at each origin. Such distinctions between ventral and dorsal areas have been found in various mammals, such as non-human primates, cats, and rats. The scientists around Valk, however, have now provided evidence for it for the entire human cortex, and shown this may be a second important organizational principle next to the posterior-frontal axis. 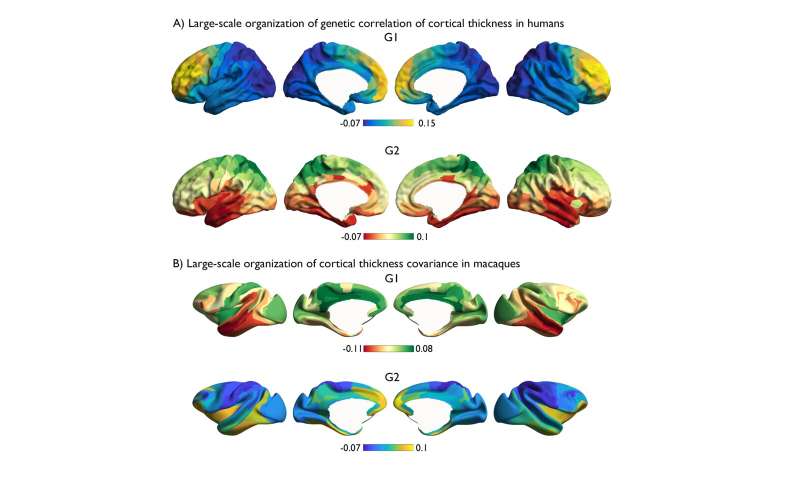 This two-axis-organization, in turn, is largely determined by the genetic relation between brain regions. This means that the association between the structure of two brain regions is driven by shared genetic effects. Moreover, similar axes have been found in the brains of macaque monkeys, indicating these axes are conserved through primate evolution. “At the same time, even if genes and evolution shape the organization of brain structure, we must not forget the environment also plays a crucial role in shaping our brains and minds,” Valk says. “Though we focused specifically on these genetic effects in the current study, other work of our team has shown that behavioral training can also alter brain structure.” Further studies are planned to understand how these two factors that shape brain structure interact.

To understand the major axes of brain organization is like having a compass, and can help to better navigate in the brain. “We may better understand the evolution and function of specific regions and better evaluate the impact of brain disorders,” Valk adds. For example, previous work of the authors has shown that organizational axes differ between individuals with autism spectrum disorder and healthy controls.