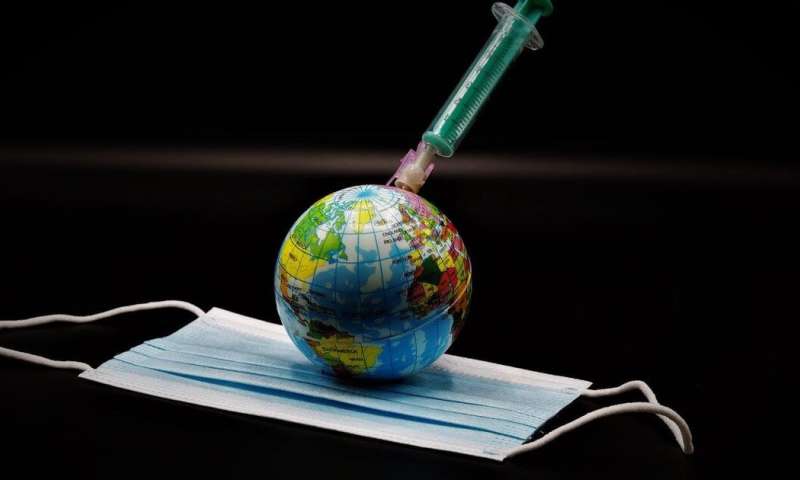 Since the birth of the World Trade Organization (WTO) in 1995, most member states have had to abide by the Agreement on Trade Related Intellectual Property Rights (TRIPS), which protects patents and copyrights including those applicable to new diagnostics, vaccines, medicines and medical supplies.

Most developing countries supported it, though some wanted more time to discuss the implications with their home governments. Most developed countries, including Canada, opposed the proposal. A final decision is on hold but is likely to be made within a matter of weeks. What is at stake for Canadians, and for the global community?

The IP incentive system enshrined in TRIPS guarantees companies specific protections including a time-limited monopoly on the marketing of their products. Proponents argue that companies need to recover their investments in research and development in order to stimulate continuous innovation.

TRIPS IP rights, however, may clash with other goals, including protection of public health and the human right to health. Controversies persist over how long patents should last and how much profit is reasonable to support new research and development. Given that drug prices are higher due to patents, and protection of trade secrets may limit production and distribution of needed innovations, are patents even appropriate in the context of a global pandemic?

What the waiver is asking for

The proposed TRIPS waiver would apply only to drugs, vaccines, treatments, diagnostics, medical supplies and test data related to control of the COVID-19 pandemic. It is time-limited and would end when enough people have been vaccinated to create global herd immunity to the virus. None of the other TRIPS rules would be affected.

Essentially, the waiver, which needs approval by three-quarters of WTO members, would empower WTO member states to neither grant nor enforce patents or other TRIPS rules related to COVID-19. This would allow all WTO member states to engage in research, manufacturing, scaling up and supplying COVID-19 tools without fear of a trade dispute.

Developed countries opposing the waiver argued that the TRIPS agreement already contains sufficient flexibilities for this purpose. One of these flexibilities is a country’s right to issue compulsory licenses for less expensive generic equivalents when facing a public health emergency. A second flexibility allows countries lacking in manufacturing capacity to import generics from other countries.

The TRIPS flexibilities are important policies but they are not perfect. Rules allowing compulsory licensing apply only on a case-by-case and product-by-product basis. This slows down the ability of countries to scale up production of needed COVID-19 products. Developing countries with laws that permit compulsory licensing, or that have used such laws in the past, have also come under criticism and trade-bargaining pressures from both the European Union and the United States—homes to companies holding most of the world’s drug and medical-supply patents.

TRIPS waiver opponents also argue that voluntary licenses should take care of most COVID-19 shortage issues. But the ability to agree to a voluntary license rests with the patent-holder and represents only a second-best short-term solution.

Waiver proponents counter that today’s pandemic situation is novel, one in which more than US$70 billion public funding has gone to support COVID-19 research and development, often with no strings attached.

A few companies have voluntarily given up some of their IP rights. Moderna, a vaccine front-runner, has said it would not enforce its patents and would license its COVID-19-related patents with other vaccine manufacturers. Its trade secrets for its vaccine, however, would not necessarily be shared. AstraZeneca will make its Oxford-researched vaccine available on a cost basis until the pandemic is over, although stipulating that only applies until July 31, 2021. Eli Lilly, in an agreement with the Bill & Melinda Gates Foundation, will forego royalties for low- and middle-income countries for its (still-experimental) COVID-19 antibody treatment.

But these are all one-off arrangements with an aura of charity rather than of obligation. As of Oct. 15, not a single drug company has joined the World Health Organization’s COVID-19 Technology Access Pool (C-TAP), which encourages industry wide contributions of IP, technologies and data to allow global sharing and manufacturing scale-up of all COVID-19 health products. Pharma appears reluctant to give up future potential IP windfalls.

Just do as we do?

There is also irony in the patent-holding rich world opposing the developing world’s proposed TRIPS waiver.

As early as March, France, Germany, Hungary and Canada passed legislation empowering public health officials to issue compulsory licenses for COVID-related drugs, devices and diagnostics, with compensation (royalties) to the patent-holder to be settled only after-the-fact. Chile and Ecuador have done likewise. The United Kingdom and the U.S. have no need to, as they have existing legislative powers allowing them to appropriate use of inventions in cases of emergency or if they were partly publicly funded.

These measures are less far-reaching than those proposed by South Africa and India and should be pursued by developing countries. But they are partial measures still encumbered by the case-by-case, product-by-product requirements for compulsory licensing. That is why the waiver proposal is important. It upends the government/pharma backroom bargaining for one-off deals, which are justly criticized for their lack of transparency.

The waiver simply and openly says: IP rules concerning COVID-19 are off limits until the WHO confirms the pandemic is over.

IP rights aren’t the only barrier

The waiver proposal has garnered a lot of support. UNAIDS is a strong supporter, recalling “the painful lessons from the early years of the AIDS response.” So, too, are The Elders, a group of former national and United Nations leaders founded by Nelson Mandela. Over 400 civil society groups support it, including two Canadian global health organizations.

But the waiver opponents still have one card to play: that IPs are not the main impediment to COVID-19 health products. Instead they point to inefficient and underfunded health and procurement systems. And they do have a point—one that has long been known and a focus for global efforts to strengthen health systems worldwide. But decades on the gap between what many poor countries need or what they can finance on their own remains unethically vast. The pandemic will only make this situation much worse.