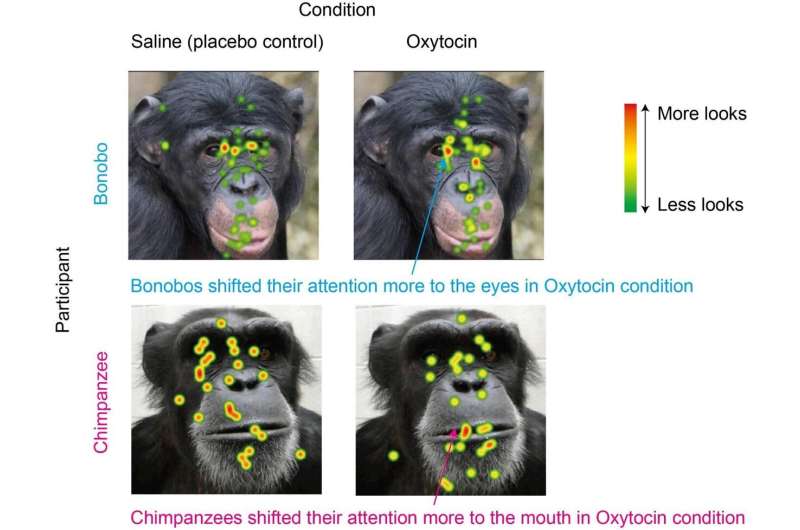 Despite being our two closest relatives—separated by just two million years of evolution from one another and six million from us—chimpanzees, bonobos, and humans have numerous important differences, such as in lethal aggression demonstrated by chimpanzee males and the high social status of bonobo females.

Now a research study suggests that the hormone oxytocin may have played a central role in this evolutionary divergence.

“Oxytocin is a hormone neuropeptide found in mammals,” explains author James Brooks, “but despite its ancient origins, its role can vary even among closely-related species.” Among these roles are a wide array of social behaviors, some of which have recently been associated with certain species-typical behaviors in great apes.

Based on these behavioral findings, a team from Kyoto University and Azabu University in Japan examined oxytocin’s effect on eye contact, a key social behavior that is known to both differ widely between bonobos and chimpanzees and is tightly tied to the oxytocin system in humans, monkeys, and dogs.

The researchers predicted that if oxytocin is key to the divergence of social traits, it would act differently in the two species and promote species-specific behaviors.

Using a non-invasive technique similar to that employed in tests with humans, oxytocin was nebulized—made into an aerosol—into a box where the apes had access to juice should they choose to participate. While drinking the juice, the apes passively inhaled the nebulized mist and were then shown still and video images prepared for each species, while their gaze was recorded with an eye-tracking device.

The team found that for bonobos—as with humans—oxytocin shifted attention more to the eyes in the images, while chimpanzees instead shifted their gaze more to mouths. Significantly, these changes enhanced known species differences.

“Due to the importance of eye contact in many social behaviors, such discrepancies could lead to broader behavioral differences through feedback loops, with greater eye contact leading to species-typical behavior leading to further oxytocin release,” says co-author Fumihiro Kano.