Leonor Garcia held her clipboard close to her chest and rapped on the car window with her knuckles. The driver was in one of dozens of cars lined up on a quiet stretch of road in Adelanto, California, a small city near the southwestern edge of the Mojave Desert. He was waiting for the food bank line to start moving and lowered the passenger window just enough to hear what Garcia wanted. Then she launched into her pitch.

“Good morning! We’re here to talk about covid-19 today! Do you have a minute?” she said in Spanish.

After a brief conversation, Garcia learned the man had no internet connection or phone of his own but was 66 years old and wanted to get the covid vaccine. He had tried to visit a pharmacy in person, but the shots were all out for the day. Garcia took down his name and the phone number of a friend, so she could reach the driver later about a mobile vaccine clinic that her organization, El Sol Neighborhood Educational Center, was putting together for the remote desert city sometime in April.

Then it was on to the next car. And the next. As the line started moving, she and fellow health worker Erika Marroquin jogged up and down the sidewalk, taking down names, phone numbers and preexisting conditions. It was the first mild, sunny day the High Desert region had seen in weeks, and the exercise made them sweat. 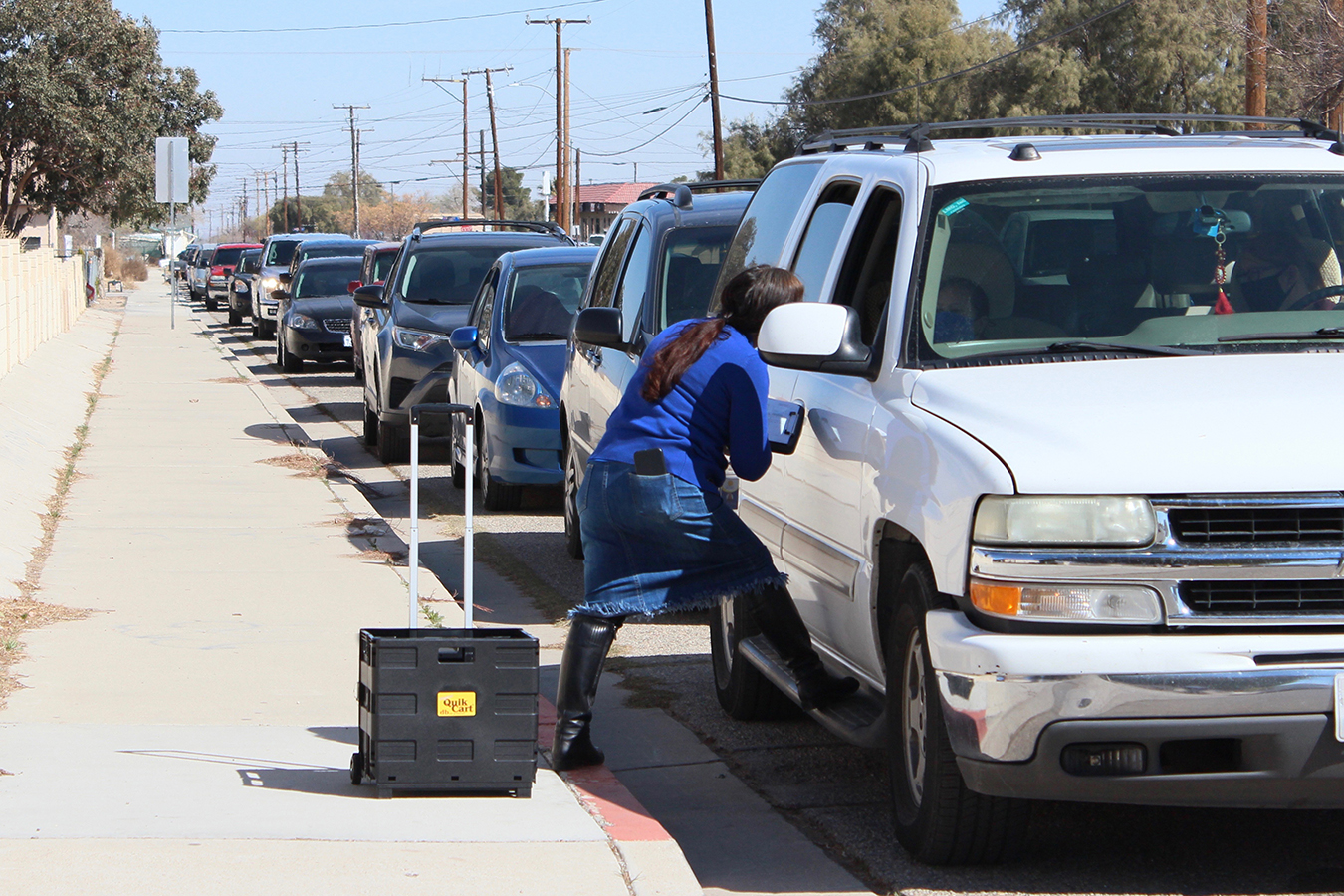 After 90 minutes, the food bank was done for the day, and Garcia and Marroquin had spoken to people in 54 cars. They had found six people eager for the covid vaccine and eligible for it immediately. Ten more wanted to be put on a waiting list for leftover doses.

The rollout of vaccinations in California, as in many states, has been slow and chaotic. More than 5 million of the 24 million adults in the nation’s most populous state have been at least partially vaccinated, while an additional 5.6 million are fully vaccinated. Come April 15, all adults in California will be eligible to sign up for a vaccine, and by early summer the goal is to have plenty of vaccine for any adult who wants it.

But the country needs to get the vaccination rate to about 75% to keep the virus from easily spreading — a level called herd immunity by experts on infectious diseases. But even that figure assumes the population is homogenous in terms of vaccination. That’s why the state’s ability to stave off another covid surge may rely on people like Garcia and Marroquin — community health workers and organizers doing time-intensive, laborious work — to prevent pockets of the population with low vaccination rates in remote or isolated communities from becoming a tinderbox for a new covid surge.

“When you have geographical or social pockets of unvaccinated people, it really messes up herd immunity,” said Daniel Salmon, director at the Institute for Vaccine Safety at Johns Hopkins University’s Bloomberg School of Public Health.

U.S. measles outbreaks in recent years provide a sobering example. State and national vaccine coverage is quite high, “but then you’d have these communities where a lot of people would refuse vaccines, and then measles would be imported and create an outbreak,” Salmon said. Outbreaks have hit certain Orthodox Jewish communities in New York, Somali immigrants in Minnesota and affluent pockets of Southern California where anti-vaccine parents lived. 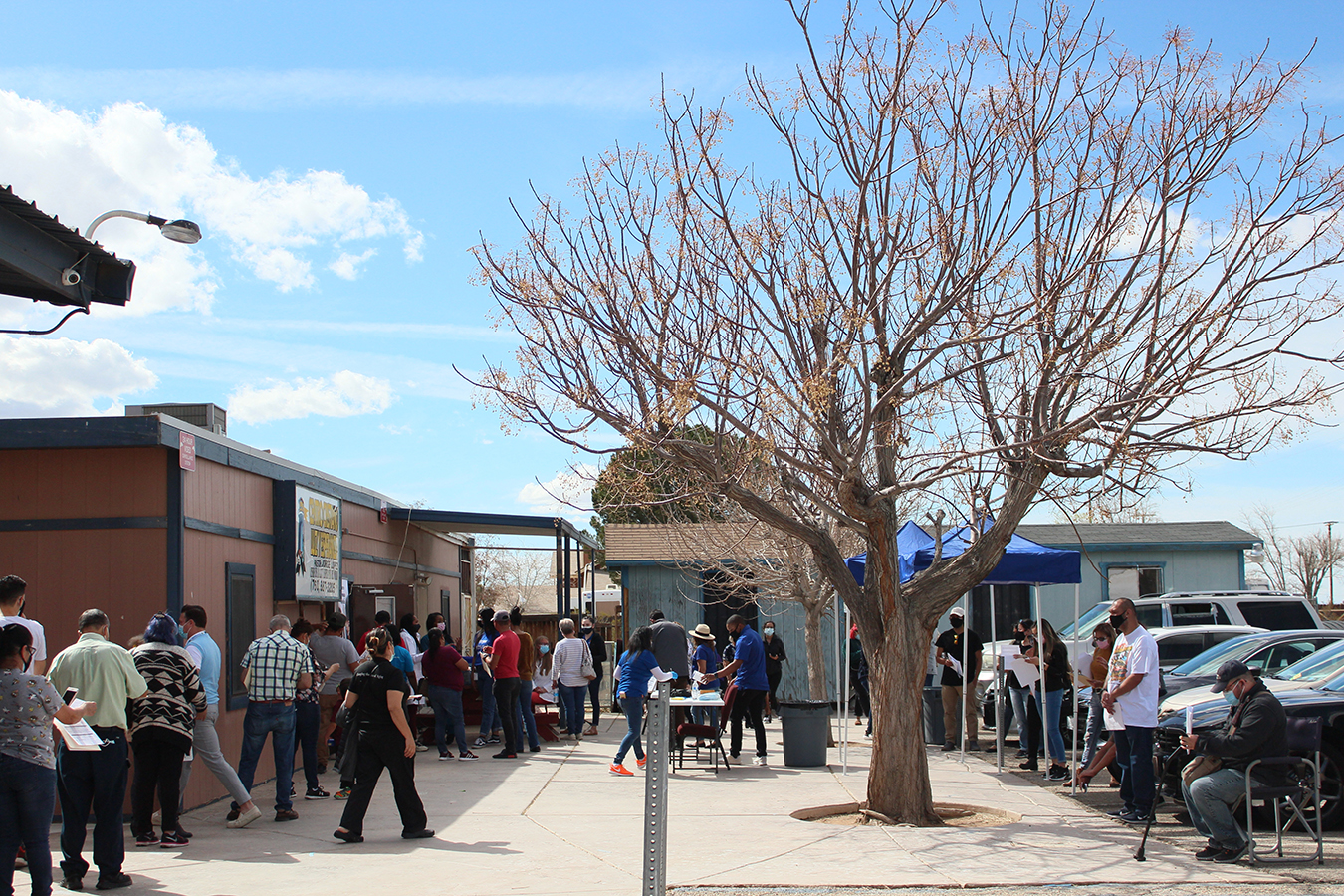 The coronavirus is still circulating widely in California, though at much lower levels than two months ago. The virus, especially an increasingly common, more contagious variant, could easily rip through vulnerable communities with low levels of immunity. In Adelanto, where 29% of residents live in poverty, less than 6% of the adult population had been fully vaccinated by March 20.

As of March 26, most of the more than 15.9 million vaccine doses distributed since December had gone to the healthiest, wealthiest places in the state. Community-based organizations like nonprofits and churches are clamoring for more funding — and trust — to carry the vaccine the final mile to the people they’ve been serving for years.

El Sol’s success in getting Black, Latino and other underrepresented populations vaccinated debunks the idea that these groups won’t get the shot, said Juan Carlos Belliard, assistant vice president for community partnerships at Loma Linda University Health in San Bernardino County. Loma Linda is collaborating with El Sol to staff and provide doses for clinics. The people who show up are ready for their vaccine, though some are a bit hesitant, he said.

“They’re not like our middle-class folks who are literally crying for the vaccine,” Belliard said. “These folks are still nervous about it, but you’ve removed almost all of these other barriers for them.” 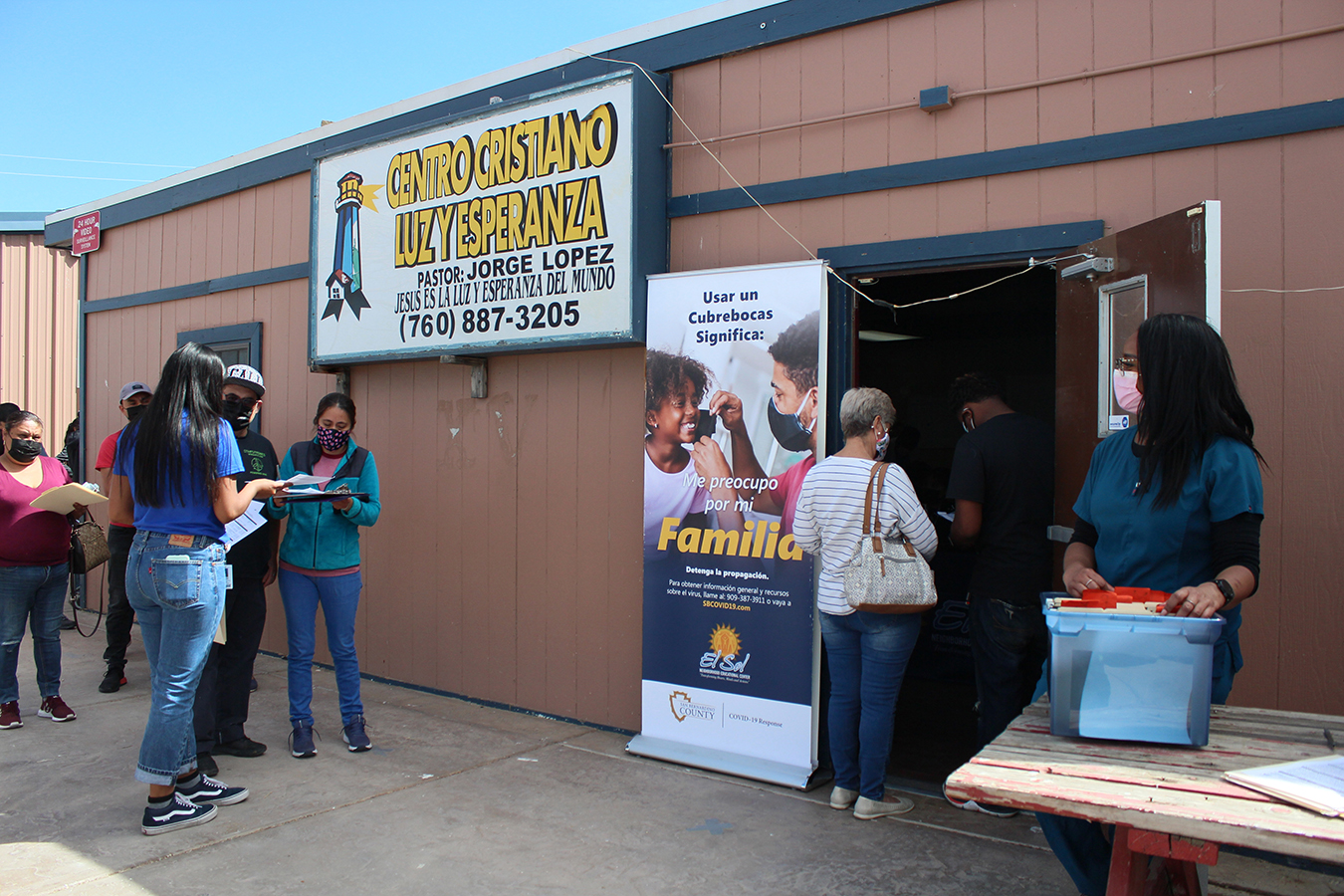 El Sol’s community workers were funded by a $52.7 million combined effort from state and philanthropic funding that provided grants to 337 organizations considered “trusted messengers” in their communities. The money was pushed out to groups like El Sol that had proven track records of shoe-leather canvassing for voter registration or census surveys.

El Sol received $120,000 from the public-private initiative to support its general outreach and educational efforts for covid vaccination. But the group was in the dark about whether it would get any reimbursement for the mobile vaccination events it has organized in San Bernardino County, said executive director Alex Fajardo.

El Sol held a pop-up vaccination event Feb. 17 at Centro Cristiano Luz y Esperanza, a church located off a two-lane expressway in Adelanto, surrounded by desert scrub. Medical staffers, students and vaccines arrived from Loma Linda University Health, about an hour away, to vaccinate 250 people, and returned a month later to give people their second doses.

Patricia Perez, 47, and Rosa Hernandez, 69, a mother-daughter pair, were among those who got their vaccines at Centro Cristiano. 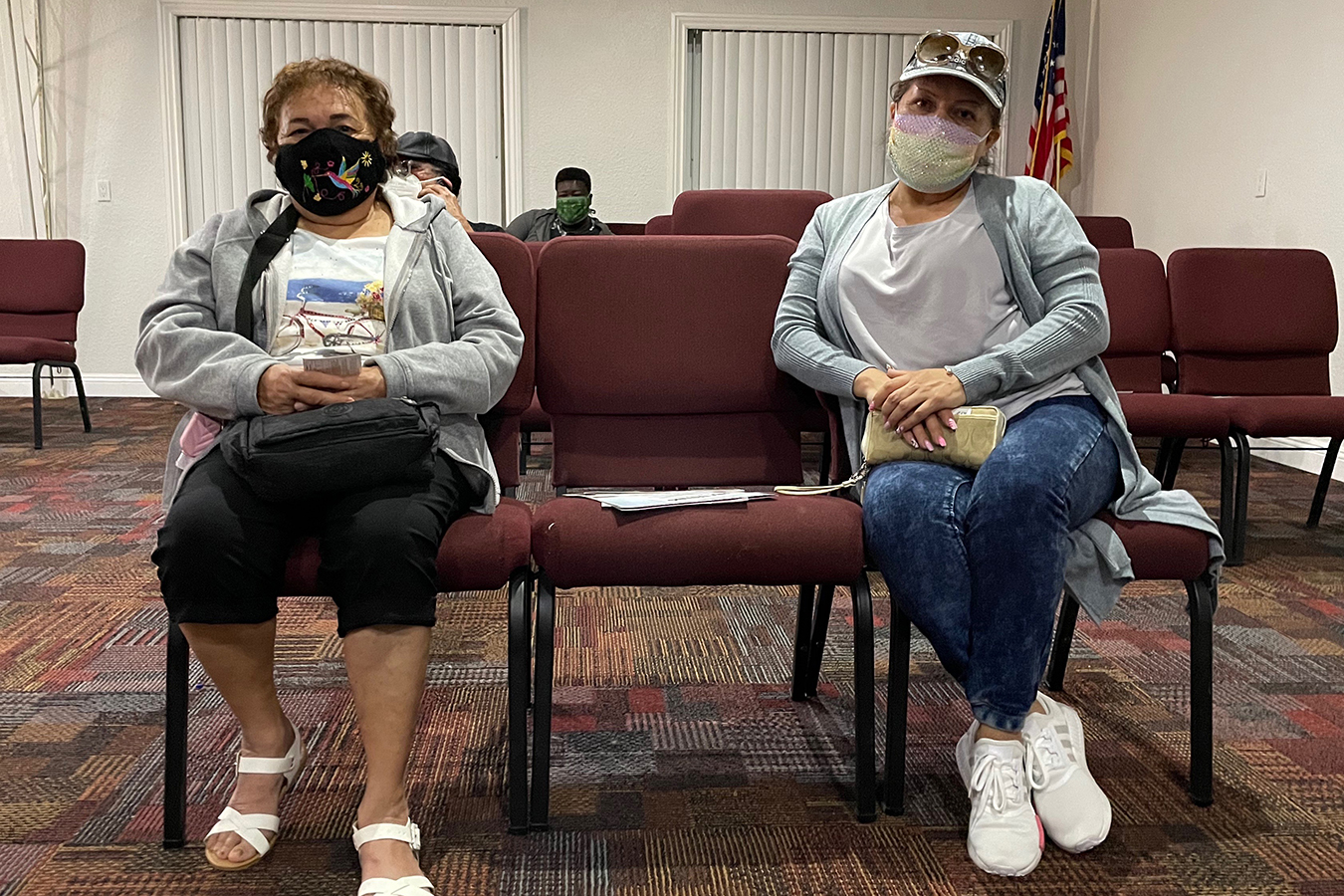 Perez’s father, who works in a supermarket dairy department, fell ill with covid in June and was unable to return to work for six months. No one else in the seven-member household ended up testing positive, but Rosa Hernandez is a cancer survivor and her daughter was worried about her.

Despite multiple calls to a county phone line, Perez had been unable to line up a vaccine for her mom. The family’s internet connection, in the nearby town of Hesperia, was spotty, and Perez couldn’t really navigate the websites or find any information in Spanish, the language she’s most comfortable with.

She jumped at the chance when she heard about El Sol’s pop-up event through someone at her church. Perez also managed to snag an additional dose for herself after someone didn’t show up for their appointment. Now she and her mom are fully vaccinated, Perez said, and it wouldn’t have happened without El Sol.

The group plans to do three more vaccination pop-ups in the High Desert area. But future support for its clinics, vaccine outreach and education are murky, said Fajardo.

“That’s a very fair assessment,” said Susan Watson, program director for the Together Toward Health initiative of the Public Health Institute, the philanthropic funder behind some of El Sol’s work. “There’s an opportunity here for people to be thinking about the future, and how we do things that doesn’t necessarily leave community groups permanently on the outside, only tapped into when there’s an emergency.”

Community Coalition, a South Los Angeles nonprofit founded in 1990, also received grants from the public-private partnership to raise awareness about covid vaccines, but no additional funding to deliver vaccines to the people. Still, it mobilized staff to knock on doors, text and email eligible people to turn out for a two-week pop-up vaccination event at a neighborhood park in early March — providing 4,487 people with their first vaccine dose, said the group’s chief operating officer, Corey Matthews. 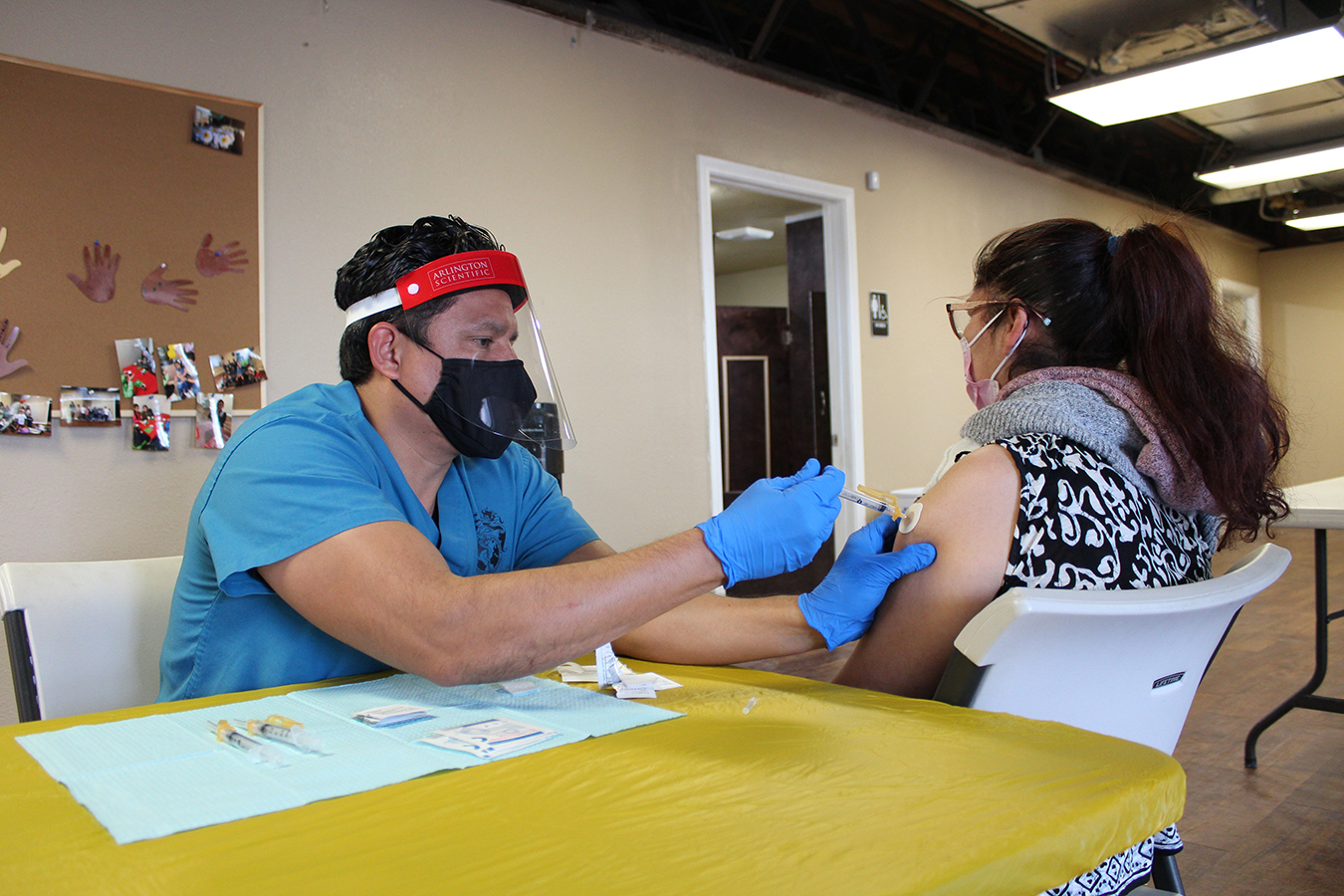 Dr. Mark Ghaly, the state’s secretary for health and human services, promised to provide more money for groups that are getting their communities vaccinated. “This is not a volunteer job,” he told KHN at a news briefing. “This is real work, and I want to be part of the team that makes that a reality for all of them.”

Los Angeles County department of public health Director Barbara Ferrer echoed that sentiment. “They were there before the pandemic started, they’ve been there the entire time during the pandemic, and they’ll be here long after the pandemic,” she said.

Whether or not those promises hold up, community groups say, they want to be part of the vaccination effort.

“Even if they don’t give us money, we’ll keep doing the work,” said Fajardo.