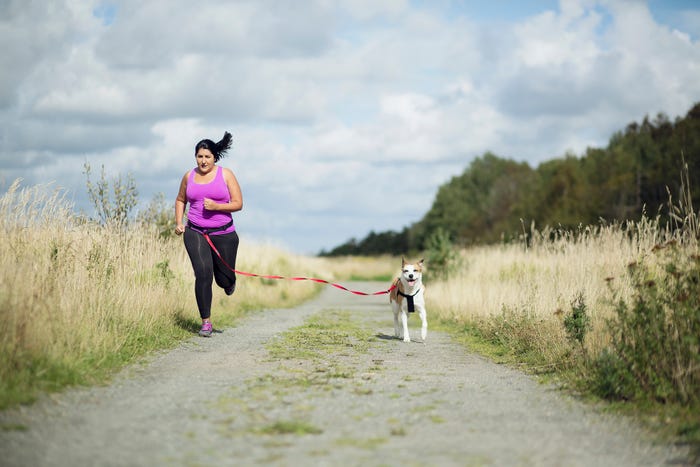 If there was ever a year to glue your behind to your couch, kiss buff body aspirations goodbye, and watch your daily step count sink to new lows, 2020 was it.

And while some people did indeed indulge their sedentary sides, and others necessarily forewent fitness as caretaking and work responsibilities took priority, many with the luxury to be able to do so invested in fitness — and reaped the rewards.

Here are the purchases nine people made that most improved their fitness this year. With a long winter indoors looming, it's not too late to follow their leads.

Ashlee Binns, an acupuncturist who moved from New York City to Colorado during the pandemic, invested in a Hydrow rowing machine that allows her to row "on" bodies of water all over the world, guided by live and recorded workouts.

"I love that I can do a workout 'on' the Charles river and see fall happening," she told Insider. "It makes me feel more connected to our pre-pandemic home since we don't have four seasons where we are now."

She said the routine has improved her cardio fitness and firmed up her old body. "It's eliminated that stagnant feeling you get from sitting way more than normal." Plus, she finds the rowing motion meditative and has earned Hydrow gifts for reaching certain milestones.

"Overall, I feel invigorated, motivated, strong, and get a sound night's sleep."

Mary Jo Fisher, a school administrator in New York City, used to bike about 150 miles a week. But in April, when less was known about how the virus was spread, riding outdoors around other cyclists seemed risky. So she bought a Wahoo Kickr bike trainer, which temporarily turns a road bike into a stationary bike.

"Not being able to ride, both for exercise and mental health, was a huge loss for me," Fisher said. "I'm happy I have it now as we head into round two of this and winter, when riding outside isn't feasible."

"It gave me specific objectives or distances for each day, which was more effective at holding me accountable than just the generic, 'I think I'll run some miles today' goals," Peplinksi added. "They were often small goals but made a big impact in the end."

She said she also uses a Nike app for strength training, which pairs nicely with the Garmin for running.

Dr. Becky Siegel,  a pediatric physical medicine and rehabilitation fellow in Boston, bought her dog, Cinder, a Fi Smart Dog Collar, which tracks dogs' activity. The broader platform ranks dogs' distances by breed, state, and city, and, at one point, Cinder was No. 3 in the state, walking up to 70,000 steps a day.

"Cinder loves it," Siegel told Insider. "I have met people at parks and on hikes who have it and who know Cinder, since she is high in the ranking, which is funny."

It gets Siegel, who's logged up to 12 miles a day, out too. The pair is taking it easy now, though, after too much walking led Cinder to develop tendinitis.

The pandemic has been a boon for Peloton's at-home fitness offerings, with the company experiencing a 172% growth in sales in one quarter. Insider digital culture reporter Rachel Greenspan is glad she bought into the hype, purchasing a stationary Peloton bike for her Manhattan apartment.

"When the pandemic shut down my favorite spin studios and I was unable to continue my main fitness obsession, it didn't take long for me to decide to invest in a Peloton, she said. "Now, I have a full spin studio in the comfort and safety of my own apartment, fit with funny instructors and motivational classes. Being able to get in my favorite form of cardio, with thousands of others spinning alongside me virtually, has been worth every penny."

Insider executive editor Ariel Schwartz also got a spin bike, but opted for the Schwinn IC4, which is a like a Peloton without the built-in screen. She bought an iPad to stream Peloton classes (and occasionally Netflix) while riding.

"It's provided both stress relief and an easy way to cardio in at any time of day — I sometimes hop on the bike for 30 minutes instead of a lunch break," she said. "Even once I feel comfortable going back to the gym, I'll probably opt to do my cardio at home."

Linda Mitchell, a fitness professional and competitor in Monroe, Ohio, had her entire hamstring reattached before the pandemic. "I had gone through the healing process and I was feeling ready for something," she told Insider.

So she and her husband signed up for a virtual Trifecta Spartan race, which involves hundreds of burpees, lunges, squats, and pushups, and 36 kilometers of running.

Mitchell won the Trifecta in her age group and sex category, which she'd also done five years ago. "This felt like a major victory during COVID restrictions and comeback from my injury," she said. "This was so fun I ended up getting my entire gym to do with me too."

Work-from-home life wore on Ashley Armstrong's muscles, so the sales consultant in the Vancouver area bought a massage gun. The investment "literally saved me and my husband," she told Insider. "It really was the best investment we made all year that not only made us feel good, but allowed us to keep our productivity up for work as well."

Insider health, fitness, and nutrition reporter Gabby Landsverk said buying a 33-pound Bella bar from Rogue Fitness during the pandemic has been "the single best fitness investment I've ever made."

"Most people think of squats and deadlifts as the key barbell movements with heavy weight, but it's also super versatile with low to medium weight for working compound or isolated muscles, with rows, curls, and land-mine type movements too," she said.

"And if you're used to lifting heavy and got away with dropping weights at the gym, a home barbell can have an added bonus of enforcing good form," Landsverk added. "You'll have to maintain control over the weight through the whole movement on every rep to preserve your floor (and a peaceful relationship with your neighbors), meaning you can get the most out of every exercise."