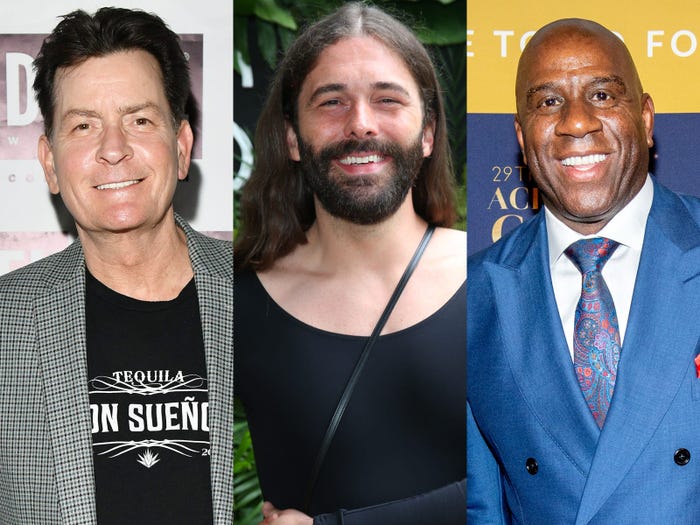 It's been almost four decades since the HIV and AIDS crisis began, and today there are still 1.2 million people living with HIV in the US.

Throughout the years, celebrities have come out to identify themselves as part of that statistic, giving a face to the virus and sharing the reality of living with the diagnosis. Stars like Freddie Mercury and Rock Hudson died from AIDS — the syndrome caused by HIV — while Magic Johnson and Jonathan Van Ness are living with HIV today.

Here are celebrities who have spoken out about their HIV diagnosis.

In 1991, Magic Johnson announced he was leaving the LA Lakers after learning he was HIV positive. 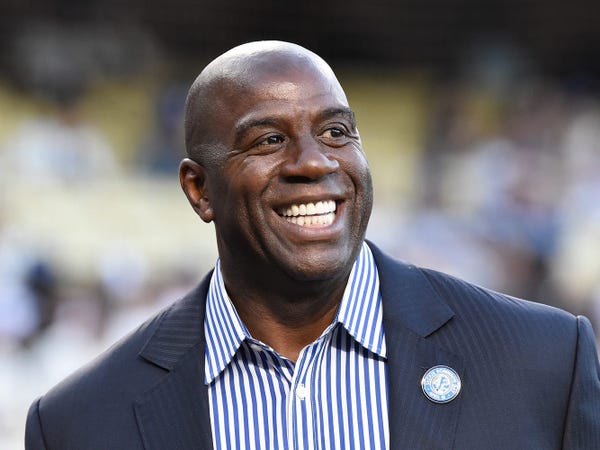 In the '80s, Johnson enjoyed a successful career with the LA Lakers and was named MVP three times. However, it all came to a halt in the early '90s when he learned he was HIV positive and thought he was going to die.

"Because of the HIV virus I have obtained, I will have to retire today from the Lakers," he said at a press conference at the time. Sports reporters present cried at the announcement.

It was one of the first times that a heterosexual, non-white celebrity had come forward with their diagnosis, breaking stereotypes around the disease.

Today, Johnson is living a healthy lifestyle and works to raise awareness around HIV and AIDS.

"You have to have these conversations because they are important," Johnson said in an interview with PBS' "Frontline" in 2011. "Especially coming from me: I am living with this virus. I don't want [my kids] to ever have it, so I have to tell them … what can happen to them if they do the same thing I did."

In 2015, Charlie Sheen revealed he had been HIV positive for four years. 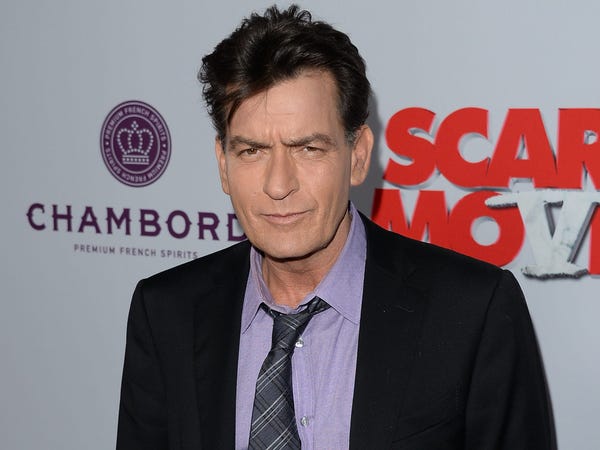 Sheen was experiencing "crushing headaches" and thought he had a brain tumor, but his doctor told him he was HIV positive. Sheen said, over the next few years, he paid millions of dollars to people threatening to go public with his diagnosis. In 2015, however, the actor shared the diagnosis himself in an interview with "Today."

"It's a hard three letters to absorb," the actor said in the interview. "It's a turning point in one's life."

Over the years, Sheen has taken a set of medications to manage the virus. 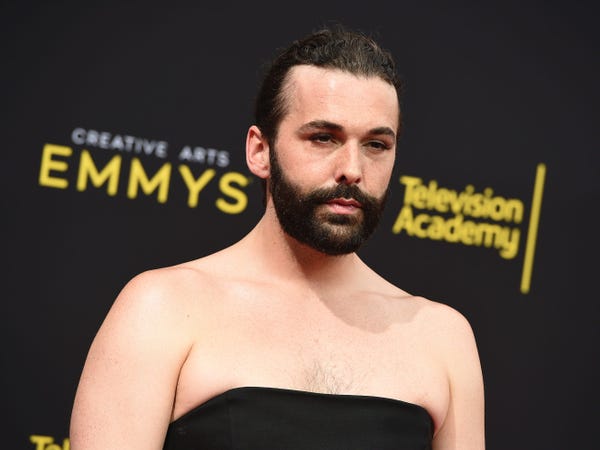 In 2018, Van Ness jumped into the spotlight with the mega-successful Netflix series "Queer Eye." As one of the show's breakout stars, the grooming guru was profiled by The New York Times in 2019 and revealed he was HIV positive.

"When 'Queer Eye' came out, it was really difficult because I was like, 'Do I want to talk about my status?," he told The New York Times. "And then I was like, 'The Trump administration has done everything they can do to have the stigmatization of the LGBT community thrive around me.' I do feel the need to talk about this."

Since his announcement, Van Ness has been working to dispel the belief that an HIV diagnosis is a death sentence.

"I think the thing that surprises most people is just that it's a chronic illness and that it's not a terminal one," he told Insider reporter Rachel Hosie. "The treatment has come so far. It could be treatable and totally manageable, much in the way that diabetes is. You just need to make sure that you have access to healthcare. So that's all."

"Hamilton" star Javier Muñoz announced he is positive shortly after taking the lead role in the Broadway musical. 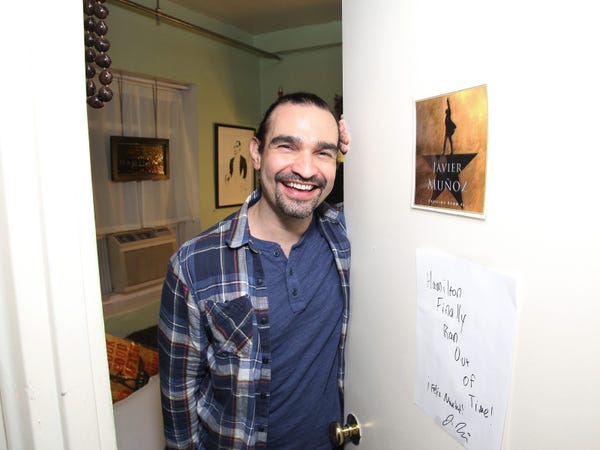 In 2016, Muñoz took over the coveted role of Alexander Hamilton in the Broadway musical "Hamilton" from Lin-Manuel Miranda, who originated and created the part. When Muñoz jumped into the spotlight, he wasn't shy about revealing the fact that he is openly gay, a cancer survivor, and HIV positive.

"I have been living with HIV since 2002, and I'm undetectable," Muñoz told The New York Times in 2016. "I'm healthy, I'm strong and I'm very out about that because of the stigma still attached to it."

He continued, "I have this joke — if it's funny or not funny, I don't know — but the joke is that I have died several times already, and that's how it feels. My life completely and drastically changed in 2002 when I was diagnosed with HIV, and then again last year with cancer. And you can't unknow what you know."

"RuPaul's Drag Race" star Ongina announced he has HIV, becoming one of the first reality stars to share their diagnosis. 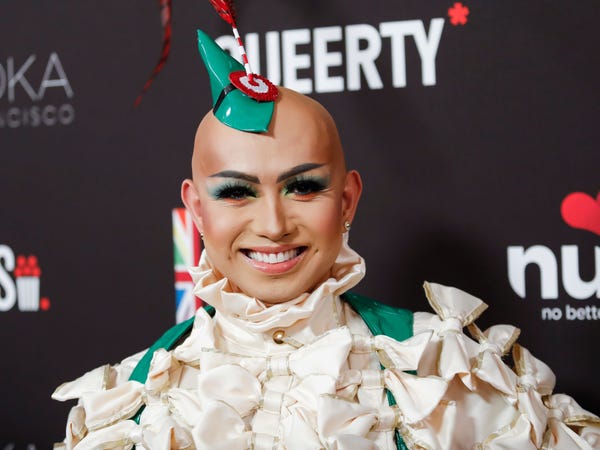 "RuPaul's Drag Race" premiered in 2009, and Ryan Ong Palao — who goes by Ongina on the show — was one of the contestants. In that first season, he revealed he is HIV positive.

"It changed my life drastically because it was a weight lifted off my shoulders to be able to finally say it out loud and own it for myself," Palao told amfAR in 2017. "It also became an inspiration for others to live out loud about being HIV positive. I'm happy to have helped people come to terms, like I did, with their status."

Palao also appeared in the 2020 all-star season of "Drag Race," but he has devoted his career to raising awareness for this disease.

"While testing is becoming more and more accessible, it's important that we continue to talk about it and spread the importance of knowing one's status," Palao said.  "At the same time, we need to advocate for protected sex. I know and understand that this might be easier said than done, but there's a power when your voice is loud and you continue to talk about it and I'm hoping that my voice is."

Danny Pintauro, who reached fame as a child star in "Who's the Boss?" announced he has HIV in 2015. 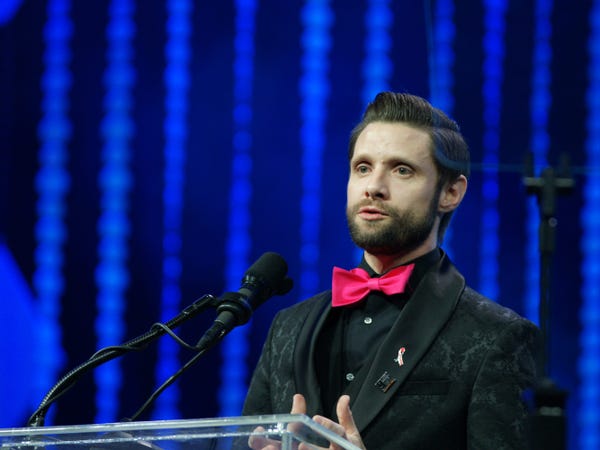 After his success on "Who's the Boss?" Pintauro struggled to find his path in life. In 2015, the actor sat down with Oprah Winfrey to talk about this unclear time in his life that led to him experimenting with crystal meth and a positive HIV diagnosis.

"I went in for a regular checkup," he said in the interview. "You know, as a responsible gay man, you're getting an HIV test done every six months … And you sort of waited two weeks on pins and needles, or at least I did, because I was just terrified of the idea of getting HIV … It's backwards. You've spent so much time terrified that you're going to get it, and then you have it. You don't have to be terrified anymore."

Pintauro said he told his husband that he was positive before they even kissed and now hopes gay men are just as open about their diagnosis.

"It is definitely one of my life regrets that I wasn't able to take that [responsibility] on," Pintauro told People in 2015. "So now that all of this is happening, I feel like the fates are telling me that this is my opportunity to be that beacon of light, and I'm going to do everything and anything I can to live up to that."

Styx's bassist Chuck Panozzo is living with HIV after being diagnosed in 1991. 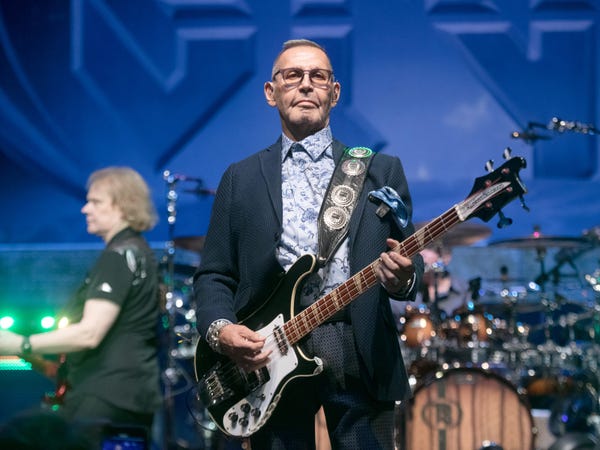 Panozzo founded Styx in the '70s with his brother and hid the fact that he was gay throughout the band's most successful years in the '70s and '80s. In 1991, he was diagnosed with HIV and decided to not take any medication. By the end of the decade, he was so sick that he was forced to take a 23-pill regimen.

"It was the sickest time of my life, both psychologically and physically," Panozzo told Out magazine in 2017, "but that's where I found the strength to say, 'I can no longer live this life as a closeted man, so I'm willing to leave this band.'"

He eventually came out and told the world he was HIV positive. After getting himself healthy, Panozzo is still touring with Styx and hoping to be a role model for the younger LGBTQ community.

"When I go onstage I never know who's going to be out there," he told Out magazine. "But if there's a young gay man who's gone through the same thing I have, I'd like him to think, 'If he can do this, then why can't I?'"

Just 24 hours before his death, Freddie Mercury confirmed he had AIDS. 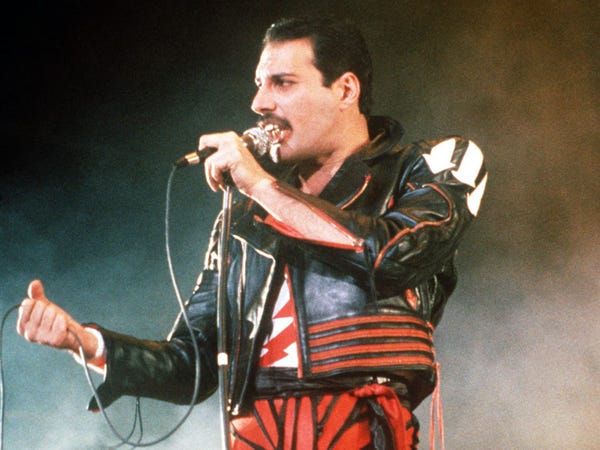 As frontman of the rock band Queen, Mercury rarely talked about his sexuality or health. In 1991, however, he released a statement telling the world he had AIDS.

"Following enormous conjecture in the press, I wish to confirm that I have been tested HIV positive and have AIDS. I felt it correct to keep this information private in order to protect the privacy of those around me," Mercury said in the statement. "However, the time has now come for my friends and fans around the world to know the truth, and I hope everyone will join with me, my doctors, and all those worldwide in the fight against this terrible disease."

The rock legend passed just 24 hours later. He was 45.

Rapper Eazy-E revealed he had AIDS in 1995 and passed away a week later. 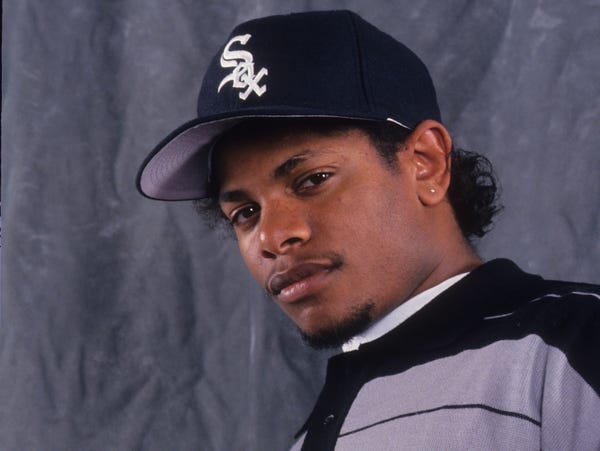 In March 1995, Eazy-E — Eric Wright — was at the height of his stardom when he was hospitalized. He released a statement at the time, revealing he had AIDS.

"I'm not religious, but wrong or right, that's me," Wright said in his statement. "I'm not saying this because I'm looking for a soft cushion wherever I'm heading. I just feel I've got thousands and thousands of young fans that have to learn about what's real when it comes to AIDS. I've learned in the last week that this thing is real and it doesn't discriminate. It affects everyone."

Actor Rock Hudson was the first celebrity to announce he had AIDS. 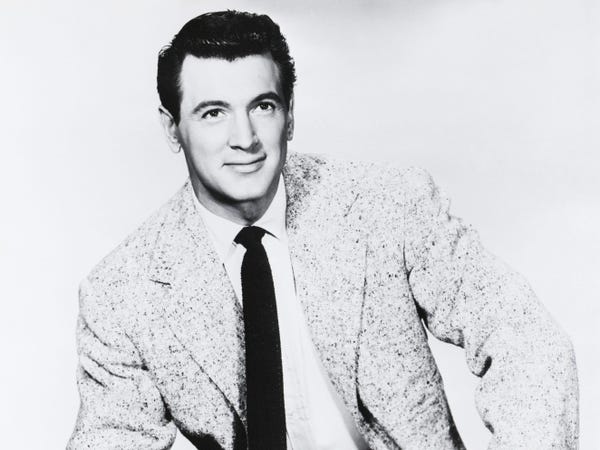 In the public eye, Hudson was a leading man in Old Hollywood during the '50s and '60s, but secretly he was gay. In 1985, Hudson announced he had AIDS, becoming the first celebrity to do so. His announcement, and eventually his death, brought the AIDS crisis into the national spotlight.

"Since Hudson made his announcement, more than $1.8 million in private contributions (more than double the amount collected in 1984) has been raised to support AIDS research and to care for AIDS victims (5,523 reported in 1985 alone)," People magazine wrote at the time. "A few days after Hudson died, Congress set aside $221 million to develop a cure for AIDS."