I was abandoned as a baby after losing my right leg in a chemical fire in China. I lived in an orphanage there until the age of 7, when I was adopted and moved to Michigan.

I spent a lot of my childhood struggling with my identity. Being a girl with such a visible disability, being a minority, being adopted, being an immigrant—I’m all of these things that everybody else around me is not.

But then, when I was 14, I got my first sports prosthetic from the Challenged Athletes Foundation. The first time I ran, I just thought, “This is it.”

I had this freedom that I’d never had before and this feeling I was going to be okay—and that I could do anything. It just took me to a new place. I never had any aspirations to become a professional athlete, but I knew I’d always continue to run because I loved the feeling. My passion for the sport eventually led my to joining the track team in college at UCLA, and later to the Paralympics.

The more I ran, the more confident I became in myself and my body. But when it came time to find the right clothes to wear on practice runs or the most comfortable shoes for race days, it was really tough. There just wasn’t anything out there that made me feel empowered.

I remember wearing such ridiculous clothes to exercise as a young girl.

I used to wear baggy basketball pants on runs, even during hot and humid Michigan summers—partially because I wasn’t ready to expose my prosthetic, but also because those pants legs were the only ones wide enough for my blade to slip through. And running tights were out of the question. To fit my leg through just one side of the tight wasimpossible.

But in 2012, I saw a picture of an Australian Paralympian. She was an above-knee amputee like myself, and her running tights had been cut at the start of her prosthetic. I just remember thinking how how sleek and cool she looked. So I began buying my own tights and asking local seamstresses to cut them. The first few places I went to seemed really confused. “Oh wait, you only want one leg cut?” I got asked repeatedly. Others told me they didn’t have a machine that could tailor raw material or workout apparel without making itall bunched or damaged. So it took some time to find the right person, but now I have a seamstress here in San Diego who gets the drill.

I think people are so unaware of how the little things, like what you wear and how it looks, can bring so much joy. Before, I would have to pull down my pants in public to swap my prosthetic. It’s uncomfortable to do that in open spaces. But with my altered tights, I can switch between my walking leg and my running leg at any time—at a park or the beach, from my car or at the track where there’s not always a restroom. 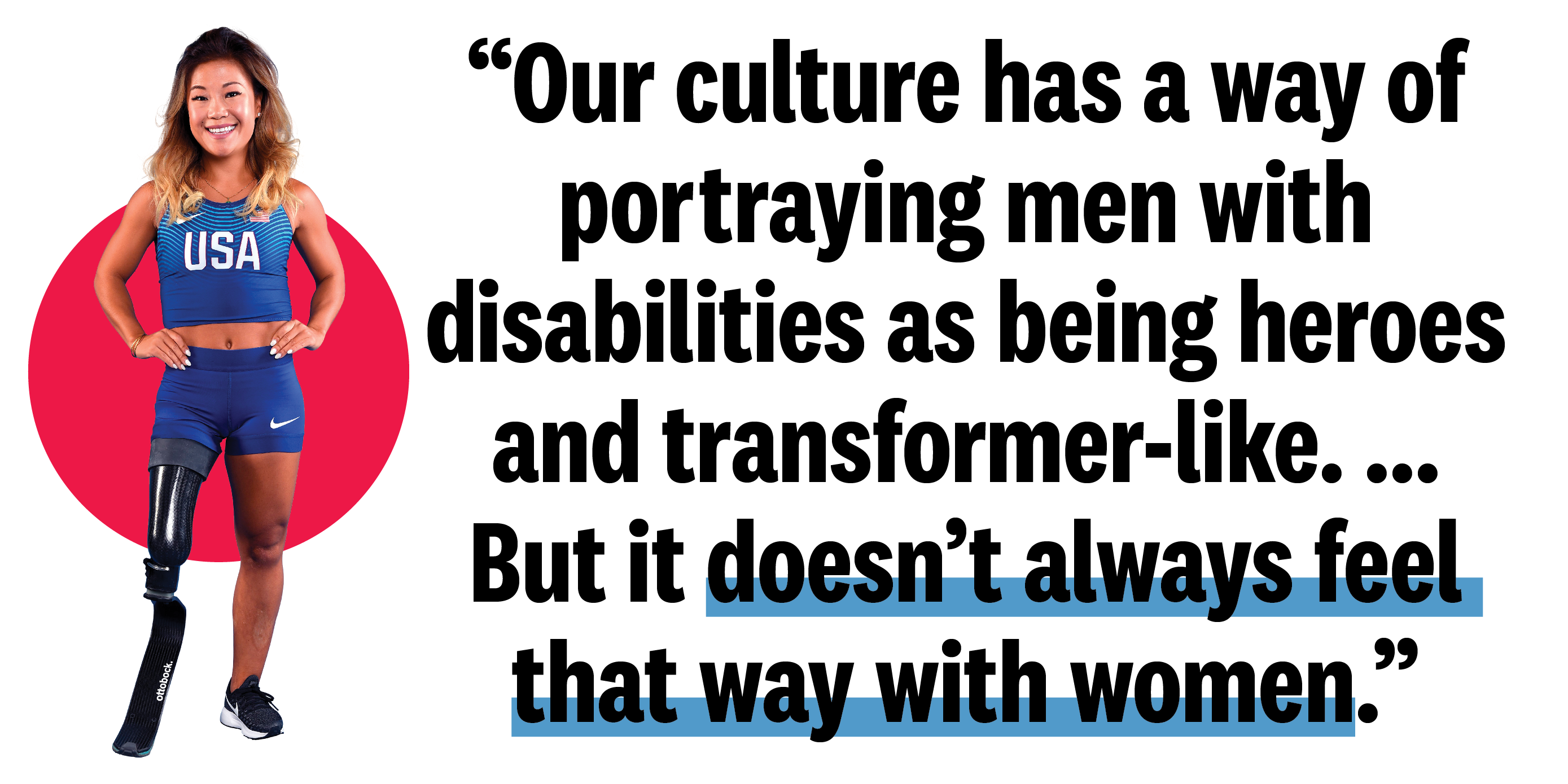 Able-bodied people put on clothes and shoes and they don’t even think of how a style or look could impact someone that has challenges with putting it on—or getting it to look a certain way. The tailored leggings gave me more options in terms what I wanted to look like. I didn’t always have to wear big, wide shorts or baggy pants. I could put on something that was sleek, functional, and comfortable.

But shoes were even more difficult to figure out.

I’m a children’s size 11 in sneakers, and I’m missing my left big toe, which creates a huge balance issue. Early in my career, the smallest track spikes I could find on the market were a woman’s size 5. And to make up for the difference in sizing and comfort, I used to stuff my running shoes with a nylon sock just so my foot wouldn’t fly out.

But in 2015, I signed with Nike and was given my first pair of custom running spikes. I was already running a hundred meters at 19 seconds. But wearing spikes that actually fit, were stable, and didn’t flex too much was a game changer. I was able to do the same run in 17 seconds. To drop more than two seconds in 100 meters is just crazy. And it goes to show what a difference adaptive activewear can make.

It’s not like our training changed or we did anything different in terms of that. Just having a spike where I wasn’t spending as much time on the ground when I made contact with it was a huge benefit. I went on to train, qualify for, and compete in the Paralympics in Rio the following year and placed fifth in the 100 meter. And the same people used to make fun of me as a kid were suddenly bragging to everybody about how they knew me.

Now, several brands are developing clothing for people like me, and it’s about time.

Zappos, for example, features a collection of brands and companies that sell adaptive clothing, shoes, and underwear. And Nike has an entire line of adaptive sneakers called the FlyEase. To be able to slide those on and zip them around the backside instead of lacing them up has been really convenient for my prosthetic foot. Now obviously, I’m not running in that shoe—I have a blade. But being able to leave my house without having to put on two completely different shoes has been really nice.

But we still have a long way to go. I have a teammate who’s a high-arm amputee, for example, and she’ll wear long-sleeve shirts in the summer because she can tuck the sleeve on the inside and the arm isn’t left dangling like it would be in a short-sleeve shirt. I hope that the industry will continue to evolve, whether it’s by offering more options for people like my teammate or creating better alternatives to the zipper or things that require tying. (For arm amputees, those actions are hard to do!).

And if you don’t have great upper-body mobility or range of motion, getting a tight-fitting shirt on can be a serious challenge. The industry needs more options that don’t involve pulling your arm through a shirt or over your head.

The imaging around adaptive athletes also needs to change.

Our culture has a way of portraying men with disabilities as being heroes and transformer-like. I’ve heard, “They’re so cool to have that bionic technology” or, “Those blades make them look awesome.” A man’s disability has a cool factor, but it doesn’t always feel that way with women. Society is taught to look at a woman with a disability, or a bodily imperfection, and see it as weakness.

I remember my seventh grade ski trip. I’d been debating whether or not to go since I’d already skipped the previous year’s. I didn’t know how skiing would work with my prosthetic leg, but I decided to give it a try. When my turn came, I skied down the slope and saw a patch of grass with little to no snow on it—and I was heading right toward it. I had no ability to steer my skis, so I hit the patch and fell down, and my leg flew off with the ski while my classmates stood there either laughing or staring in shock. They’d never seen anything like it. I became the girl whose leg flew off and didn’t ski again for another two years.

I want to help change the narrative and show that women with disabilities who compete in sports can be incredible. We are powerful, we are strong, and we are no less attractive than anyone else. And this leg is not the thing that makes me weak. My scars, my burns, my prosthetic tell a story of all the hardships, the struggles, and the trauma that I have survived. I’ve overcome it all. This is my power—that’s what makes me strong. And I want whatever I put on my body to reflect that too.