The legend of Alex Smith grew a bit more back in Week 13 of the NFL season as he quarterbacked the middling Washington Football Team to a 23-17, come-from-behind, upset victory over the previously undefeated Pittsburgh Steelers on Monday Night Football. But the unlikely victory took a back seat to Smith’s bloody left leg.

As Smith dropped back for a pass with the Redskins down 14-0 late in the second quarter, one of his own lineman inadvertently slashed him with a cleat. Blood quickly soaked his burgundy sock and streamed over his white ankle tape. “I’ve never had one gush like that,” Smith said after the game.

But a little blood paled in comparison to what Smith had already returned from. Just two years ago, he suffered one of the most catastrophic leg injuries in sports history, so you’ll forgive him if he scoffs at this latest flesh wound. It is nothing compared to what his right leg still looks like underneath that other burgundy sock and ankle tape.

“Basically, it’s like a skin quilt,” Smith says of his leg now. “When they took my quad from my left leg to cover the bone in my right, they took skin with it, so in the middle of my shin I have a chunk of skin from my left thigh and, around that, a patchwork of skin grafts. And there are definitely some crevices where it just doesn’t all line up perfectly.”

You’d never have known it watching Smith on the field this season. Somehow, the QB who could barely walk two years ago emerged as Washington’s starter in November, and sparked the Football Team to a 5-2 finish that landed them an improbable NFC East title. Smith is back in the playoffs facing the Tom Brady’s Tampa Bay Bucs on Saturday.

And no, it’s not an easy matchup, but given everything Smith’s been through, can you really count him out?

If you have no idea what Smith is talking about, here’s a refresher. On a rather innocuous play during Washington’s week 11 game in the 2018 season, Smith was sacked in the backfield by J.J. Watt and Kareem Jackson of the Houston Texans. He fell at an awkward angle, and his right leg was caught underneath him. He suffered a compound, spiral fracture of his tibia and fibula, both of the long bones in the shin; that means the fracture was caused by a twisting force and the bones also broke through the skin. 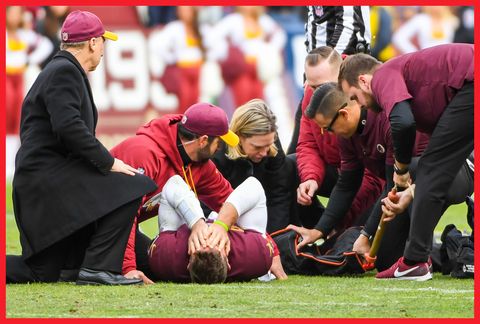 A few days after the initial surgery to set Smith’s broken bones, he developed necrotizing fasciitis, a fast-moving infection commonly known as “flesh-eating bacteria.” His leg turned black. Huge blisters formed. He became septic. Saving his life was the top priority; saving his leg would be secondary.

As the bacterial infection crept up his leg, doctors were forced to repeatedly remove more and more of Smith’s muscle tissue, leaving the bones of his lower leg exposed. Because bone cannot heal unless it’s covered, they used muscle tissue from his left quad and right gastrocnemius to create “flaps” to cover the bone. Rectifying this situation required a total of 17 surgeries. Smith spent months in a wheelchair, then on a walker, then on crutches, and finally, had an external fixator attached to his leg for eight months.

Because of the horrific nature of the injury, Washington Football Team physician Dr. Robin West called a friend, Johnny Owens, MPT and former Chief of Human Performance Optimization at the Center for the Intrepid. The department of defense facility in San Antonio, Texas, specializes in the rehabilitation of military personnel with blast injuries, and Smith’s gruesome leg injury was indeed more reminiscent of something that would occur on a battlefield than a football field. 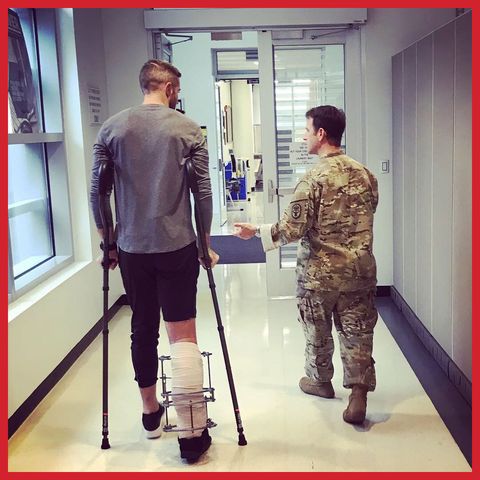 It was Owens who encouraged Smith’s doctors in Washington to keep his leg despite the extensive damage; they could always amputate later if their rehab attempts failed. Smith received special dispensation from the Secretary of Defense to visit CFI, where his rehab plan was laid out.

“It was humbling and crazy and it really put my injury into perspective,” Smith says. “But at the same time, it gave me such hope, because Johnny and the doctors and PTs at CFI had seen injuries like this so many times before. To them, the idea of me playing again wasn’t a question. It was without a doubt, when to everyone else, it was crazy.”

The Start of the Comeback

It was Owens—who says Smith’s leg now looks “mangled, like a shark attacked it”—who first put a football back in Smith’s hands on a visit to CFI in February of 2019, just three months after the injury. Smith’s leg was in the fixator, and he was doing exercises on one knee when Owens flipped him the pigskin. “He didn’t feel sorry for me,” Smith says. “He pushed me. And we played catch.” 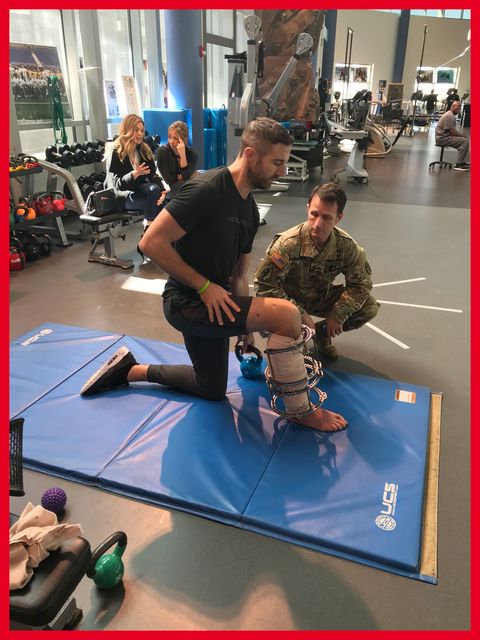 Because Smith lost so much muscle in his lower leg, including his anterior tibialis and extensor muscles and the majority of his peroneals, he had to learn to get the most out of the muscles he had left: his gastroc, although part of it was taken to cover his bone, along with his soleus and posterior tibialis. Now, over two years after the initial injury and despite the fact that he is again the starting quarterback for Washington, he fights an every-day battle for strength, balance, stability and range of motion. Ankle dorsiflexion—pulling the toes up toward the shin—is still a real challenge.

“I cannot play or do anything without wearing a brace or some kind of device,” Smith says. “Because I have drop foot, I need it to give me a little bounce. I’m pretty hobbled without it.”

Smith plays in a carbon-fiber brace. It wraps around Smith’s leg just below the knee, extends down his shin and circles his ankle, where it attaches to a blade-like piece that fits under the insole of his shoe. Smith then tapes his ankle over the brace and shoe so his foot stays in a locked position.

In his everyday life, he wears a smaller version of the brace that fits neatly under his jeans. And when he walks barefoot around the house without the brace, the difference is noticeable. “I have a definite giddy-up,” he says. “My gait is different. It’s more mild now than it was, but you can definitely see it.”

More Comfort With Every Game

To clarify: Smith is a starting quarterback in the NFL and can barely walk without a custom, high-tech brace. Still, Smith, now 36, says he’s nearly back to his pre-injury performance level. Smith made his first NFL comeback start for Washington in Week 5 against the Rams and has now played six total games with a very respectable 68.7 percent pass completion rate. As he gets game-reps at cutting, accelerating and decelerating, he says he feels closer and closer to his old self. 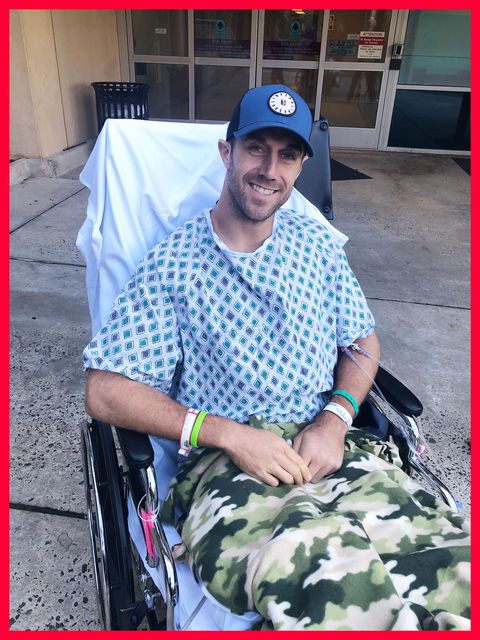 “My actual performance level is tough to gauge because I spent two years not playing football and also getting older, and I’m not sure I’ll ever be as explosive as I was,” he says. “But if you’d asked me three months ago, I would have given you a larger deficit than six weeks ago, and it’s much less now. So I’m close.”

And of course, Owens has a military analogy at the ready. “Alex is a super-talented, veteran quarterback,” he says. “But he’s like Delta Force. He’s super valuable for both his skills and his brain.” 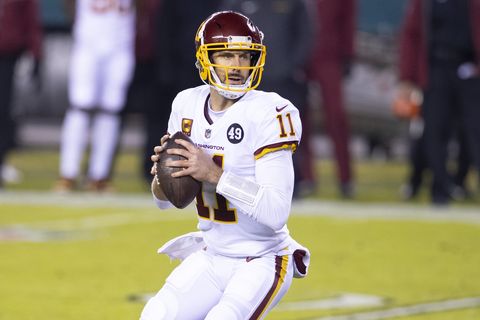 And really, when Smith reflects on the reality that doctors came very close to amputating his leg, anything he accomplishes now on a football field is gravy. He’s also looking forward to snowboarding, skiing, hiking and cycling. And he knows that, without the Center for the Intrepid, none of it would be possible. As a small thank you, Smith has designed a t-shirt in partnership with the company Attitude is Free that reads, “Just Live.” 100 percent of the proceeds go to CFI to help servicemen and women with blast injuries quite literally get back on their feet.

“There is a special energy down there,” Smith says. “Don’t go in there if you want to feel sorry for yourself. They planted the seed for me to play football again.”