“I’ve never been in more trouble in my life,” muses an exhausted but excited Spencer Matthews, two days out from completing a grueling body transformation. “And I’ve done some stuff.” Matthews has gamely batted back the inevitable questions about the PEDs that got him kicked out of the British reality TV celebrity jungle in 2013. “It was Avalar, by the way, pills not needles and they were shit—it did nothing.”

Of course, this is old news. But dredging it up is helpful to bring into sharper contrast the man photographed before you. In just 10 weeks, Matthews has purged the nascent Dadbod that comes with balancing the stresses of work life and a young family to feel stronger and look leaner than he ever has before. And this time he’s done it the right way.

The results are extraordinary. His body fat dropped from 12% to 5%, shedding 13 pounds of pure blubber and shrinking his waist from 38 inches to 32. His 5-rep-max for bench press jumped from 165 kg to 214 lbs and his deadlift rose from 154 lbs to 285. Some may argue that starting a transformation at 12 percent body fat is less of a challenge, but that’s missing the point. This was about placing a very big cherry on top of a life transformation that began two years ago. 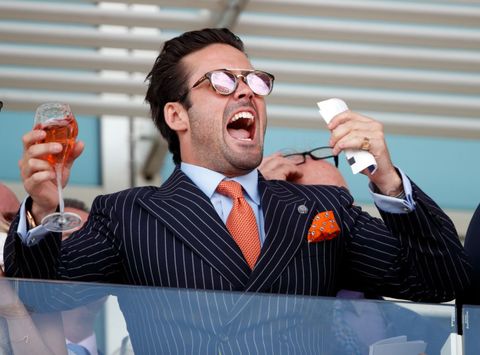 “Alcohol played a big part in my teens and 20s,” says Matthews. “I had jobs in the city where drinking was very much encouraged.” A G&T after work, a beer with lunch, taking it way too far at the weekend. “It was taking a toll on my body, my work life, I was blaming others for my shortcomings,” he continues. “I realized I was never going to live up to my potential if I continued to allow alcohol to be a hurdle.” He gave up booze six months before becoming a father.

“It’s interesting because you’re making a positive life choice,” he says. “If you go to the gym everyday people consider it a good thing, but if you go sober, people brand you as boring.” People expected him to give up giving up, but Matthews not only continued (“my wife found me unbearably high horse-y for a while”) he capitalized.

His new business Clean Co has grown incredibly quickly. With six low alcohol gins and a rum, they turned over £3 million in their first year and raised £7 million to continue growing. Matthews is a man incapable of doing things by halves, and when given the opportunity to test the benefits clean living could afford his fitness, not just his business, he grabbed it. 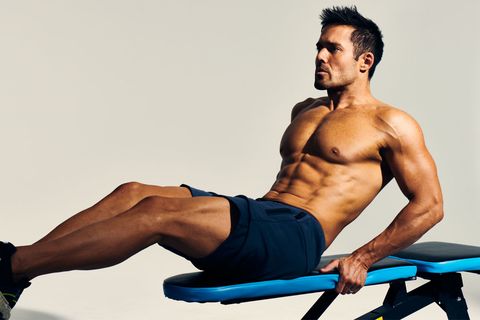 “I don’t see a point in doing a transformation unless you absolutely smash the life out of it,” says Matthews. “I wanted to look like Brad Pitt—somewhere between Fight Club and Troy.” The new set of six-pack abs attest to a job well done; it certainly wasn’t easy, but his outlook is refreshingly matter of fact.

“If you start something new that’s hard then the temptation will be to give it up,” he says. “Carry on, though, and that feeling of achievement will kick in.” It took him about a month, but under the careful guidance of trainer Shaun Stafford, he turned a corner. “No one likes being rubbish at something—I was tensing in front of a mirror and nothing happened, it was demoralizing,” he says. “But I pushed on, started enjoying it, and now it’s part of my life.” 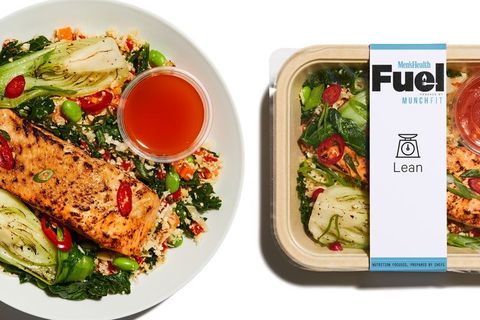 One part that won’t last past the photoshoot is his diet. Maintaining a 600 calorie deficit each day required work. “I was offered a cheat meal once a week but didn’t take it,” he says. “If I smash a bucket of chicken wings, well, that’s 2000 calories I have to burn later.” To make life easier he turned to fitness food deliveries from Men’s Health Fuel (“they were totally convenient and took all the guesswork out of watching my calorie intake”) while also re-evaluating his shopping list.

All the protein you need to build all-new muscle

Drop body fat without cutting back on flavour

Stafford classified his foods as friends or foes. When calories are king, healthy fats in the ubiquitous wellness ingredients like salmon and avocado, nuts were the enemy and replaced by low-fat, high fibre ingredients like green veg to help Matthews feel full. “We’re aiming for a 3500 calorie deficit across a week,” says Stafford. “Eat a jar of peanut butter and that’s gone.”

The calories will creep up after the photoshoot, obviously. “I’ve enjoyed lifting heavier, too” he says. Now he’ll focus on adding kilos to his lifting PBs while continuing to progress in his newfound passion, Brazilian Jiu Jitsu. He was recently awarded his blue belt by legend of the sport Roger Gracie.