PARIS — Beauty and fashion brands keep getting it wrong when hair and ethnicity are portrayed in everything from product advertising to coifs appearing on the runways, underscoring an urgent need for education and dialogue, experts say.

“This was racist, and we apologize unreservedly,” said Unilever in a statement at the time. “We immediately began an investigation to understand what happened. At the same time, we began reviewing all the marketing campaigns and images in our South Africa portfolio to make sure they match our commitment to celebrate all beauty, and promote diversity and inclusion.”

Julien d’Ys, the hairstylist who created the look, took to Instagram in a post to say he’d been paying homage to an Egyptian prince, had not intended to hurt or offend anyone, and apologized to those he did. 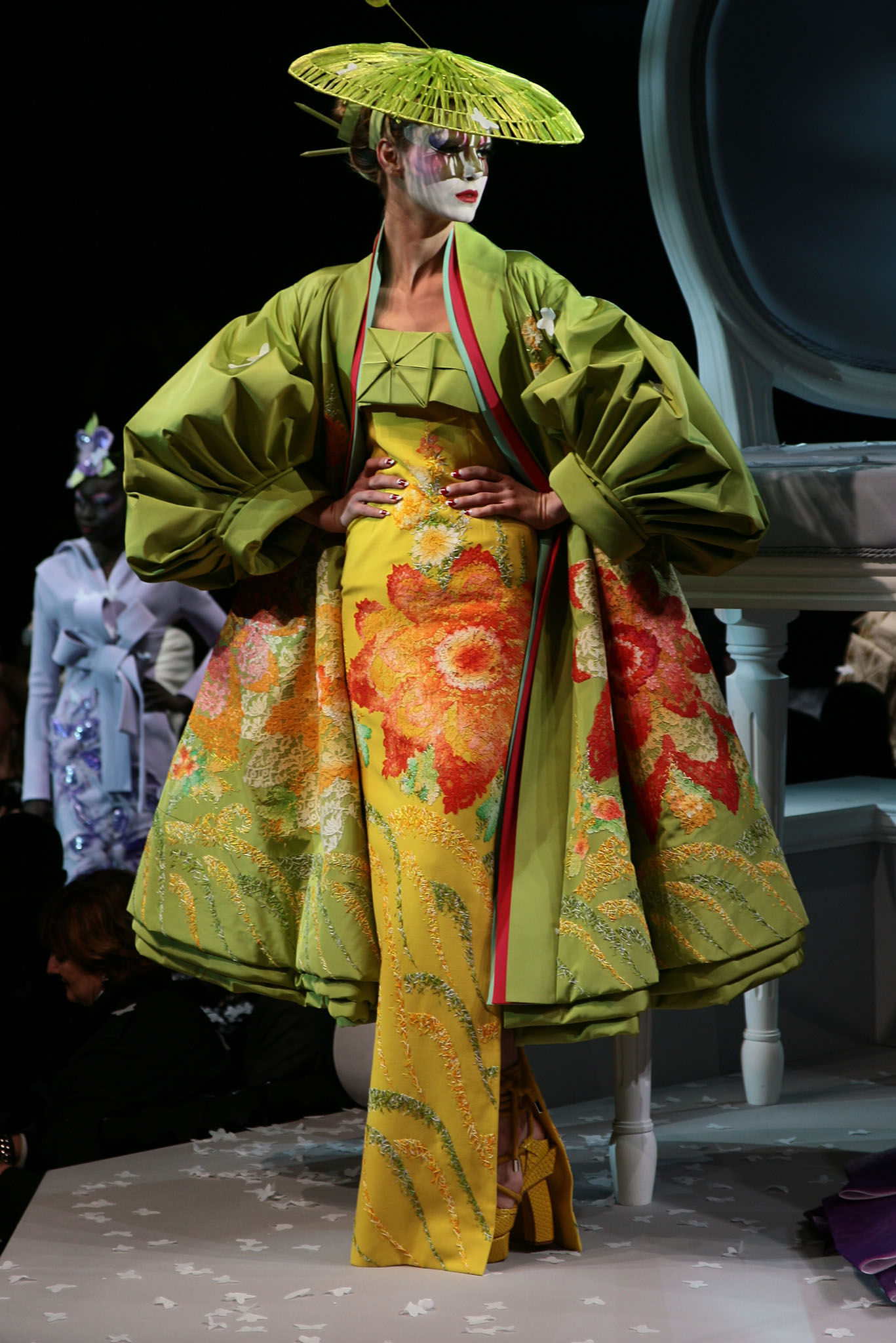 Fashion Has Found Beauty in Other Cultures for Centuries — but Has It Given Due Credit?

D’Ys told WWD in an interview recently that the experience has made him rethink his creative process.

It’s mostly in the recent past that brands have been called out for cultural appropriation. To avoid such missteps, experts urged beauty professionals to gain a better understanding of the historic meaning of Black hairstyles.

Cheryl Thompson, assistant professor at Toronto’s Ryerson University in the School of Creative Industries, who’s published the book “Beauty in a Box: Detangling the Roots of Canada’s Black Beauty Culture,” said there’s no way of looking at the wearing of Black hairstyles by white models as anything but offensive.

“The reason I say that is because there’s so much behind the hairstyle — behind the aesthetics,” she said. “What they’re not thinking about is all the hurt, pain, violence and cultural aspects beyond the look, and especially as it relates to those kinds of hairstyles — bantu knots, dreadlocks, even afros to some extent.”

Cornrows, for instance, are believed to date from thousands of years ago in Africa and indicated the tribe to which people belonged. In some parts of the world, they remain identifiers for people’s age, beliefs and wealth.

The appellation “cornrow” is more recent and developed in America because the rows of intricately woven braids can be reminiscent of cornfields.

Dreadlocks are an ancient hairstyle worn throughout many cultures, but they’ve come to be synonymous with Black culture — particularly beginning in the Thirties with the Rastafari Movement, an Africa-focused religion and lifestyle.

Of Black hairstyles’ history, Thompson said: “I don’t think you can ever get over that, that you can shove that aside and say: ‘Oh, but you know, we really want the look.’ I don’t know why people are still trying.

“The real question is: Is there any attempt in the fashion industry to collaborate with Black women or men as it relates to these kinds of aesthetic choices?” she continued. “It [isn’t] necessarily the aesthetic choice itself. It’s the fact that every step along the production line there doesn’t seem to be any Black voices. Then suddenly you see something walking down the runway or in print and you’re like: ‘What’s going on here? Did they ask anyone?’ The answer is probably, ‘No.’ Black voices probably were not in the room when decisions were being made.”

Thompson suggested a multiethnic team to address the issue of diversity-related representation.

Angela Onwuachi-Willig, a dean and professor of law at Boston University, whose areas of interest include civil rights and critical race theory, agreed that white models’ wearing Black hairstyles can only be considered as cultural appropriation.

Issues relating to Black hairstyles can be found well beyond the catwalks. Onwuachi-Willig noted in the U.S. there has been more legislation recently protecting Black hairstyles in schools and in the workplace. This summer, a federal district judge in Texas blocked a school in the state from disallowing a student to return unless he cut off his dreadlocks.

“Having several states pass C.R.O.W.N. [or Creating a Respectful and Open World for Natural Hair] Acts, having the first federal judge grant an injunction in a Black person’s favor in a hair-based race discrimination case — those are major changes. But even with these advances, you still see a lot of negative and discriminatory attitudes toward Black hairstyles,” she said. “It’s still there because racism is still there.”

Onwuachi-Willig thinks the fashion industry — and how it portrays Black hairstyles on the runway — will evolve only as fast as society at large, to which it’s inextricably linked, when it comes to racism.

The fashion industry, she said, has more power than it realizes to help shape young people’s view of what’s beautiful and acceptable.

“The industry can be a real pioneer in demonstrating to us what true inclusiveness looks like,” said Onwuachi-Willig. “What it means to truly honor all kinds of differences, including different races, and to value people equally.”

Celebrity hairstylist Ted Gibson made some other suggestions to help expunge cultural appropriation from the runways. The first is people recognizing their own individual racism.

“I believe that we all have a little bit of racism within us,” he said. “If we don’t all acknowledge the fact that [something] is racist, that it could be perceived as racist, then we have a problem globally. People have to be mindful.”

Gibson said today his own thinking has shifted when it comes to plying his trade.

“For my whole career, I have always been a hairdresser that was not really thinking about the color of skin,” he said. “I always thought about the textures of hair. You can be very light and have kinky hair and be very dark and have straight hair. But now I have to really think about what that means [in today’s current climate].”

Gibson noted alongside having a more diverse ethnic mix of models on the runways, another way to avoid appropriation is if each woman’s individual beauty is highlighted.

“When I was starting in the business, every girl would look the same [hairstyle-wise on the catwalk],” he said. “Like that was the most important thing. As of late, there were more diverse girls on the runway and the designers wouldn’t make every single girl look exactly the same. It was more individualized. This is how the globe is, and every fashion consumer isn’t from just one part of life.

“We have to open to all the possibilities of not having the same girl walking down the runway,” he said. “Because it’s old and not the way the future is. It doesn’t make sense [today].”

Celebrity hairstylist Johnnie Sapong believes that, in some sense, hairstyles belong to nobody, but when they cross certain cultural lines that’s no longer true.

“When you’re touching on something which becomes really culturally personal to someone, then it becomes a different thing,” said Sapong.

“I’m a Rastafarian, so I wear dreadlocks,” he continued. “It’s part of my way of life. I’ve worked in fashion for numerous years and have been at fashion shows where I’m making the hair into a form. Someone might call it dreadlocks, warlocks — locs, dreads, you get different variations. But as a Rasta, I’m not looking at that and going: ‘Oh, they’re being disrespectful to me.’ Because I understand what my hair is about, what it means to me.”

Earlier this year, Sapong worked with Bianca Saunders on her fashion show based on Jamaican dance culture. She asked what he thought about the male models sporting finger waves and braids.

“There were Black, white and Chinese boys in there,” he said. “This was about multiculturalism, global unity. But it doesn’t necessarily mean that’s how it’s received. Whether people [ask]: ‘Why are you doing Black things to white hair?’ I’m doing the hair. Where I’m coming from is the fact that I have respect for the culture, techniques and references that they bring in. I’m here to pay homage.”

Alongside more education, there needs to be better communication among the people making decisions for hair looks at the shows, Sapong explained.

“If you don’t want to learn, or you don’t know you have a fear of something, then it’s easier not to attack [and face] it,” he said. “It’s also a case of being able to look at something, appreciate, understand it — and then you’d understand what to do, how to deal and cope with it.

“Nothing’s going to change until people change,” continued Sapong. “It’s much larger than a fashion moment.”